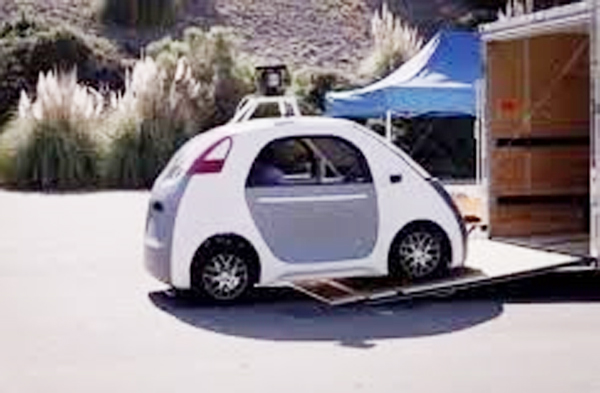 Google’s surprise reveal of its first in-house self-driving car prototype shook the auto industry like a California earthquake this week, and quickly became the biggest car news of the year. To an industry that still expects journalists to come to its car shows, Google’s announcing its “first car” at the a conference put on by Silicon Valley journalists Kara Swisher and Walt Mossberg was almost as shocking the fact that the vehicle has no steering wheel or pedals. Though the Silicon Valley-facing launch was a blow to the industry’s pride, Google’s decision to abandon traditional vehicle controls is what will keep auto executives up at night.

Whether Detroit wants to accept it or not, driverless cars will be the key step forward in the trend away from ownership of cars and toward access to mobility. They herald the end of an industry model built on scale. Like Amazon’s Kindle before it, Google’s automobile trades away the upfront sale profit of a traditional car (or book) for a stream of revenue: content, advertisements and car-as-service fees.

This development was not unforeseeable to the auto industry. But the overwhelming fixed costs of the traditional business model have always hindered automakers from really changing things. The companies are also largely made up of people who genuinely love cars and driving, making them highly adverse to autonomous technology. By fostering the automotive enthusiast culture, to the tune of trillions of dollars over the last century, automakers have created performance-related profit centers that pad their bottom lines. Good luck convincing Google’s robot driver to upgrade to the turbocharger or sport suspension.

Yet perhaps the auto industry’s biggest problem right now is that the public (and usually slavish press) are already going crazy for the Google car in ways that the carmakers simply hasn’t been able to inspire in ... well, a long, long time. Like Tesla and Uber before it, Google is scoring a major publicity coup by pointing out a simple truth: the car industry is, on a certain level, terrified of innovation. From the Silicon Valley perspective, industries that don’t hold regular revolutions are asking to be messed with, and though cars have improved enormously over the last century, they are clearly in a conceptual rut. The enthusiasm for a car that seems to flaunt every industry design norm - combining equal parts cartoon character, toaster and golf cart - is yet another sign that everything the automakers know is wrong.

On the other hand, Google has apparently studied what it would take to manufacture its own cars and came to the conclusion that it would rather not. So for all the Silicon Valley triumphalism, Google’s first 100 prototypes were built by an manufacturer in the Detroit area - reportedly Roush Enterprises - and Google’s car project leader tells Re/code, “We’re looking for friends and partners to make [manufacturing] happen.” In other words, Google isn’t really going into the car business; it’s trying to push the automakers into partnering in a major change they don’t want to see happen.

Most of the car industry is not going to rush to commit to Google’s post-steering-wheel vision, and will seek to add various autonomous-control features to the traditional car cockpit for as long as possible. Google still hasn’t begun public testing of human-control-free cars, and will have to get permission state by state. Its vehicles are also limited to Federal Low Speed Vehicle standards, meaning they stay under 25 mph, as regulations require steering wheels and pedals on highway-capable cars. As Megan McArdle points out, this low-speed approach has its advantages in terms of the liability issue, but it also points towards a bigger challenge: navigating regulations based on traditional automobiles, made in cooperation with an industry that is inimical to Google’s vision. As with Tesla’s dealer-free retail model and Uber’s frictionless taxi service before it, Google’s automotive challenge will be as much about politics as technology.

But if Google can get regulators on board with steering-wheel-free cars, the auto industry may not have a choice in the matter. Because for all the excitement about Google’s autonomous car technology and how it might affect the Ubers of the world, there seems to be little interest in who is going to make the things. To some extent, this is Silicon Valley myopia, blind to the reality that a few automakers such as Nissan have committed to fielding autonomous cars (just as Tesla has stolen the electric car thunder from the vastly more impactful Nissan Leaf, thanks to the Valley’s self-obsession). On the other hand, the resounding public apathy towards the traditional auto industry suggests that Google could simply outsource production to a major automotive supplier such as Continental or Magna and leave the heel-dragging major manufacturers behind.

This would be the ultimate blow to the car business, pushing it toward a post-industrial footing in which the question of who actually built it is no more important to a car brand than it currently is to Apple’s iPads. And it’s yet another nightmare vision for the car industry that remains trapped in a V-8 powered past.

*The author, an auto-industry consultant, is the co-founder of Daily Kanban and the former editor of the blog The Truth About Cars.