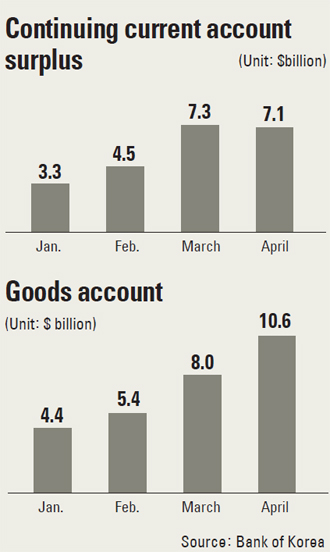 With the current account balance showing a surplus for the 26th straight month, there are increasing concerns about the potential impact on the won-dollar exchange rate and its negative effect on small exporters.

Although the current surplus in April was $7.1 billion, slightly smaller than March’s $7.3 billion, it was 56 percent higher than the same month last year, the Bank of Korea stated yesterday.

Exports grew 10 percent from a year ago to $56.7 billion in April, faster than the 5.8 percent year-on-year growth posted in March.

Imports retreated 0.9 percent from the same month last year to $46.1 billion. This is a turnaround from a 3.3 percent year-on-year increase in March.

As a result, the balance surplus exceeded $10 billion, its biggest ever.

“The goods account surplus increased on the back of brisk exports, including automobiles and steel,” said Noh Choong-sik, head of the BOK’s economic statistics department.

“Influenced by the economic recovery in the United States and Europe, the surplus trend will continue this month.”

Other markets grew as well. Exports to South America went from a 7.6 percent decline in March to 27.5 percent growth last month.

Exports to China continued to grow, but at a slower 2.4 percent pace, compared to 4.4 percent in March. By value, China remained Korea’s largest export market at $12.4 billion.

Europe was the only market that saw exports fall, declining 3.2 percent last month.

After the first four months, the current account surplus was $22.2 billion. That’s nearly $7.2 billion more than the surplus registered during the same period a year ago.

The central bank earlier this year projected a $68 billion surplus for 2014.

Earlier this month, the won traded at 1,020 to the dollar for the first time since April 2009.

“Usually, when the won appreciates, the goods account figures turn out negative,” Noh said. “But [this time] the [currency] influence has shrunk compared to the past.”

The BOK official said the impact of the strong won seemed to have less effect on exports because Korean companies have been increasing their production overseas and competitive factors other than currency have improved for Korean products.

Chae Hyun-ki, an analyst at KTB Investment and Securities, said that when looking at the past two years, exports of mobile devices such as smartphones, automobiles and computer chips have been continuously increasing.

“A stronger won doesn’t necessarily lead to a worsening export,” Chae said. “This is largely because Korean products are more competitive overall and demand has improved on the back of the recovering global economy.”

The analyst said won appreciation is likely to continue, adding that the only question will be how fast that happens.

“Since April the won has appreciated more than 3 percent, and it is the fastest appreciating currency even when compared to other currencies of developing economies,” Chae said.

Some experts say that while major conglomerates like Samsung Electronics and Hyundai Motor are well positioned for the appreciating Korean won, smaller exporters will suffer the most.

More concerning is the growing disparity between exports and domestic economy.

The economy is retreating further in the wake of the Sewol tragedy and eventually could drag down economic growth, which the central bank projects at 4 percent.