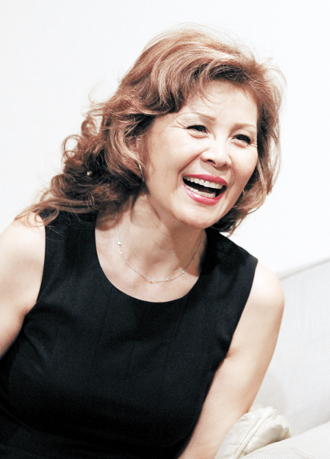 Soprano Hei-kyung Hong celebrates the 30th anniversary of her debut this year. By Shin Dong-chan

Prima donna Hei-kyung Hong beamed at reporters of the JoongAng Ilbo’s bureau in New York after learning she was the winner of the 2014 Ho-Am Prize for her contribution to the arts.

“I am so glad that I’ve achieved my goal,” said Hong, who has been an established international opera star for the past three decades.

“When I went to New York to study in the Juilliard School back in the 1970s, I was the only Korean kid in the entire class. Asians were still marginalized in U.S. society at that time, and explicit discrimination was all around,” recalled the virtuoso. “At that time, I had this feeling I was representing Asian society as a whole; so I wanted to become a formidable soprano who would gain everyone’s respect, regardless of the color of their skin.”

Hong is known as a pioneer in Korea because she paved the way for musicians junior to her. After she made her astounding debut in 1984 at the Metropolitan Opera in New York City, many young, aspiring musicians in her home nation dreamed of following her.

Though she has become a national icon for opera music in 21st-century Korea, her path wasn’t initially rosy. Having a remarkable debut was not enough to beat competitors. “I didn’t win a big title as soon I first started my career in New York. It did not come immediately,” Hong said. “I guess practicing self-control definitely helped me.

“Some young vocalists merely accept all the requests of international producers, hoping to become big stars in the opera world,” she continued. “But if you are not ready for the stage, you should be brave enough to say no to the offer.”

After having performed on stage more than 350 times at the Met, Hong, who will celebrate her 55th birthday in July, notes that it has been tough to maintain the quality of her voice.

“In Juilliard, I saw so many talented vocalists losing their gifted talents due to overstraining their voice,” said Hong, adding that she has done her best to preserve her vocal chords.

A female soprano’s voice reaches its peak between the mid-40s to 55 years old, according to Hong.

“As she becomes 55, she needs to step down from the throne,” she said.

But Hong still wants to take on other operatic roles, such as Giacomo Puccini’s “Madama Butterfly.”

“When I was younger, I deliberately avoided Madama Butterfly’s character because I did not want to conform to the rigid stereotype that Asians should play Asian roles,” the prize laureate said. “But now, I dream to show the best version of ‘Butterfly,’ or Ciocio-san, as a veteran soprano.”