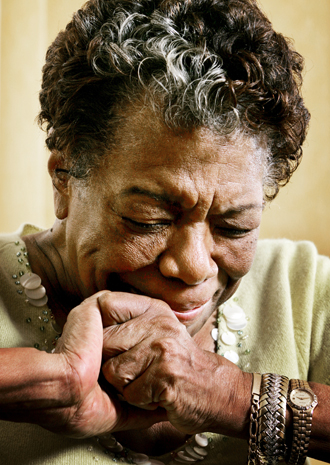 In this photo taken in 2005, poet and author Maya Angelou smiles during an interview in Santa Monica, California. Angelou died on Wednesday, at her home in Winston-Salem, North Carolina. She was 86. [AP/NEWSIS]

NEW YORK - Maya Angelou, a modern Renaissance woman who survived the harshest of childhoods to become a force on the printed page, the stage, screen and the inaugural dais, has died, her son said. She was 86.

Angelou’s son, Guy B. Johnson, said the writer died Wednesday at her home in Winston-Salem, North Carolina, where she had been a professor of American studies at Wake Forest University since 1982.

Tall and regal, with a deep, majestic voice, Angelou defied all probability and category, becoming one of the first black women to enjoy mainstream success as an author and thriving in virtually every artistic medium. The young single mother who worked at strip clubs to earn a living later wrote and recited the most popular presidential inaugural poem in history. The childhood victim of rape wrote a million-selling memoir, befriended Malcolm X, Nelson Mandela and the Rev. Martin Luther King Jr., and performed on stages around the world.

An actress, singer and dancer in the 1950s and 1960s, she broke through as an author in 1969 with “I Know Why the Caged Bird Sings,’’ which became standard (and occasionally censored) reading, and was the first of a multipart autobiography that continued through the decades. In 1993, she was a sensation reading her cautiously hopeful ``On the Pulse of the Morning’’ at President Bill Clinton’s first inauguration. Her confident performance openly delighted Clinton and made the poem a best-seller, if not a critical favorite. For President George W. Bush, she read another poem, “Amazing Peace,’’ at the 2005 Christmas tree lighting ceremony at the White House.

She was a mentor to Oprah Winfrey, whom she befriended when Winfrey was still a local television reporter, and often appeared on her friend’s talk show program. She mastered several languages and published not just poetry, but advice books, cookbooks and children’s stories. She wrote music, plays and screenplays, received an Emmy nomination for her acting in the 1977 miniseries “Roots,’’ and never lost her passion for dance, the art she considered closest to poetry.

Her very name as an adult was a reinvention. Angelou was born Marguerite Johnson in St. Louis and raised in Stamps, Arkansas, and San Francisco, moving back and forth between her parents and her grandmother. She was smart and fresh to the point of danger, packed off by her family to California after sassing a white store clerk in Arkansas. Other times, she didn’t speak at all: At age 7, she was raped by her mother’s boyfriend and didn’t speak for years. She learned by reading and listening.

At age 9, she was writing poetry. By 17, she was a single mother. In her early 20s, she danced at a strip joint, ran a brothel, was married (to Enistasious Tosh Angelos, her first of three husbands) and then divorced. By her mid-20s, she was performing at the Purple Onion in San Francisco, where she shared billing with another future star, Phyllis Diller.

Angelou was little known outside the theatrical community until “I Know Why the Caged Bird Sings,’’ a book occasionally attacked for its content.

In a 1999 essay in Harper’s, author Francine Prose criticized “Caged Bird’’ as “manipulative’’ melodrama. Meanwhile, Angelou’s passages about her rape and teenage pregnancy have made it a perennial on the American Library Association’s list of works that draw complaints from parents and educators.

“I thought that it was a mild book. There’s no profanity,’’ Angelou told The Associated Press. “It speaks about surviving, and it really doesn’t make ogres of many people. I was shocked to find there were people who really wanted it banned, and I still believe people who are against the book have never read the book.”