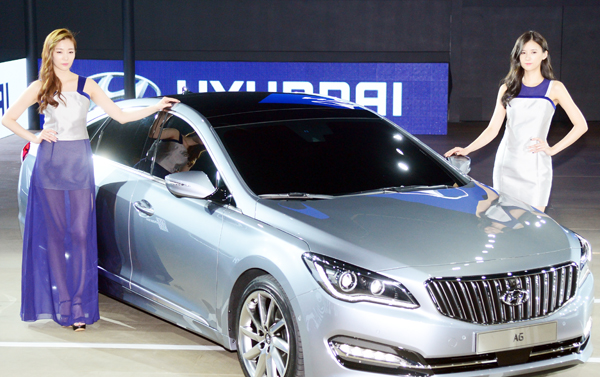 Hyundai Motor’s new premium sedan AG is introduced for the first time yesterday at the 2014 Busan International Motor Show at Bexco in Busan yesterday. The yet-to-be named car will be placed between the Grandeur and Genesis. [NEWSIS]

The biennial auto show runs through June 8 at Bexco and will feature 31 cars introduced for the first time in Korea, including the AG that will be placed between the Genesis and Grandeur (Azera in overseas) in Hyundai’s lineup.

“The AG will be released in the fourth quarter,” said Kwak Jin, executive vice president for Hyundai’s sales division. The car is expected to be priced at about 45 million won ($44,000).

Visitors to the motor show will only able to see the exterior of the AG, which is based on Hyundai’s Fluidic Sculpture 2.0 design philosophy that was applied to the new Genesis and Sonata.

Hyundai said it took more than three years to develop the front-wheel drive luxury AG, whose market name has not yet been decided. The company said it will be available only with a gasoline engine, which insiders expect to be 3.0 liters.

“With the new Genesis introduced last year and the new Sonata this year, we will be able to focus on the domestic market,” said Kwak.

A Hyundai official said the AG will be more about comfort, while the Genesis emphasizes dynamic driving.

“This model will challenge Lexus,” which appeals to older buyers with its smooth ride, said the official, who asked not to be named.

Industry observers said Hyundai’s introduction of yet another new model in the premium segment is reasonable because the Grandeur, once Hyundai’s flagship model, has become “too common” to be called premium. During the first quarter, the Grandeur was the best-selling car in Korea at 23,633 units.

“As people’s income levels go up, Grandeur has become like the Sonata was in the past, which means ‘premium level’ is not what it was in the old days,” said Kim Pil-soo, an automotive engineering professor at Daelim University College. “I can see why Hyundai is introducing the AG because there is a big gap between the Genesis and Grandeur. Whether it will appeal to local customers remains a question because imports already deliver several models in the segment.”

Hyundai admits the popularity of the Grandeur affected its strategy as consumers look for more luxurious and advanced features.

Along with the AG, Hyundai introduced a diesel version of the Grandeur at the Busan show. According to the Korea Automobile Importers and Distributors Association, diesels accounted for 68.8 percent of import sales for January through April.

The 2015 Grandeur diesel generates 202 horsepower with its R2.2 E-VGT engine. It also gets 14 kilometer per liter (32 miles per gallon), 24 percent better than the gasoline model.

The Grandeur is the first local full-size sedan available in gasoline, diesel and hybrid models.

Meanwhile, Nissan yesterday unveiled the Qashqai for the first time in Asia. The crossover utility vehicle will be Nissan’s first diesel model in Korea.

Lexus introduced its first compact SUV hybrid, the NX300h, which will be launched in Korea in October.

German brands make up more than 72 percent of the import market, and Mercedes-Benz debuted the fifth-generation C Class sedan and new GLA Class, while BMW unveiled the 4 Series Gran Coupe, and new M3 and M4 coupes. Volkswagen showed high-performance versions of its popular Golf hatchback along with concept cars, while Audi displayed the A8 L W12, the most luxurious model of its flagship sedan.