Worksite disasters a call for better safety at SMEs

Worksite disasters a call for better safety at SMEs 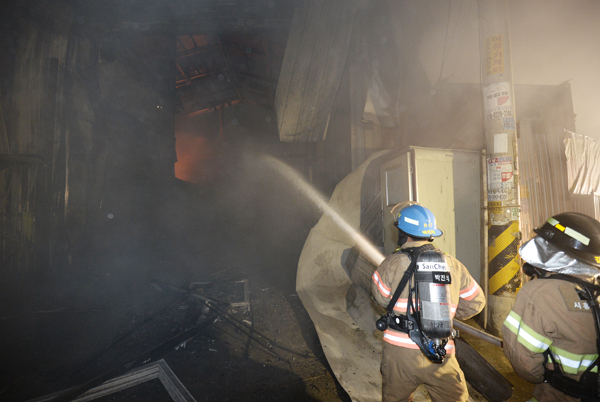 Firefighters try to put out a fire that broke out on Tuesday at Sihwa Industrial Complex in Siheung, Gyeonggi. The fire occurred on the third floor of a building belonging to a company that disposes mineral waste. A 52-year-old worker was taken to a hospital to receive treatment for his burns. [NEWS1]

After a series of fires broke out across the country this week, concerns are being raised over lax safety regulations at facilities and construction sites managed by local companies.

Although large companies have intensified their attention to safety by conducting drills and updating safety guidelines in the wake of the tragic Sewol ferry accident on April 16, their suppliers - mainly small and midsize companies - remain unchecked.

On Monday, a fire broke out at an underground construction site at Goyang Bus Terminal in Gyeonggi, killing at least eight people and injuring dozens more. A basement floor of the terminal that was overseen by CJ Foodville, an affiliate of CJ Group, which won a consortium project from Macquarie, the owner of the building, to build a commercial area that was scheduled to open in July. Fire station authorities have said that sparks from welding at the construction site caused the blaze.

“The commercial area was designed to have various facilities including a convenience store and a beauty salon,” said an official from CJ Foodville. “The police investigation is ongoing and we are not sure which construction space in the commercial area the sparks came from.”

According to the official, each of the brands opening shops in the area had handed construction over to its own contractor, which were mainly small builders.

“Accidents can happen anytime, anywhere,” said an industry official. “But poor manpower management, especially at construction sites, can raise the possibility of accidents happening. Investing in human resource is directly linked to a company’s budget, and it’s mainly the case that the portion of investment is relatively smaller at minor companies.”

In April, a worker was killed on the 12th floor of the construction site for the second Lotte World Tower in Jamsil, southern Seoul, after he was hit on the head by a piece of metal that popped out while he was testing the pressure of a pipe. According to the police, the 38-year-old worker was hired by a contractor working for Lotte.

“The overall safety management system [at small companies] is not as organized as large companies,” said an official from the Korea Employers Federation. 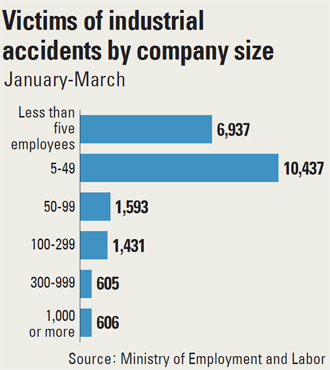 The federation on Wednesday resolved to “prevent industrial accidents” and to “become a country where safety [at workplaces] is guaranteed.”

The resolution included chief executives prioritizing safety and taking responsibility for it, and expanding related investments. The resolution was announced at an event hosted by the federation and attended by 50 CEOs of large companies in industries such as shipbuilding, automobiles, chemicals and steel.

But government figures show that the number of victims of industrial accidents is significantly higher at small companies.

According to the Ministry of Employment and Labor, the number of industrial accidents that lead to deaths and illnesses at companies with five to 49 employees was 10,437 from January to March. Companies with 1,000 or more employees had 606 employees either die or get sick from accidents.

Industry sources note that compared to large companies, it is more difficult for small companies to invest enough money on safety management and establish preventive systems.

“At [construction sites and manufacturing facilities], there is still the incorrect thought that it costs a company less to manage an industrial accident after it happens than the cost spent to prevent accidents,” said Baek Hyun-ki, chief executive of the Korea Occupational Safety and Health Agency. “Investment in safety guarantees productivity. At worksites, there should be the idea that investment in safety protects lives.”

After the Sewol ferry incident and the series of recent fires, large companies are paying more attention to safety management.

“Under the policy that Samsung will enhance the level of safety management, the company established and distributed safety guidelines in six sectors including health, environment, disaster prevention, utilities, energy and construction safety,” said a spokesman for Samsung.

“We are establishing strict standards that go beyond laws and government institutions. We are re-inspecting everything related to safety from the very basic employees’ consciousness and knowledge about safety to processing of related measures,” said a spokesman for Samsung.

Although there has not been an accident at LG Group this year, the company is also focusing on safety management, with its Chairman Koo Bon-moo ordering responsible management of safety issues to CEOs of its affiliates.

“LG Electronics has been conducting regular safety education programs in Europe, the Middle East, Asia and Central and South America in order to raise employees’ safety management awareness since last year,” said a spokesman for LG Electronics. “We also modified the safety assessment system last year, expanding the number of the lists of the assessment from six to 12 and reorganizing them to more practical ones such as emergency response, operations management and training.”