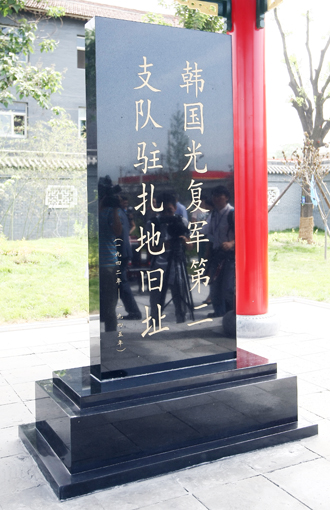 A monument honoring the Korean Liberation Army, which fought against Japanese colonization from 1941 to 1945, was unveiled yesterday in the city of Xian, China. [NEWSIS]

China yesterday unveiled a stone monument honoring the Korean Liberation Army, which fought against Japanese colonization from 1941 to 1945, in a ceremony in the city of Xian attended by South Korean and Chinese officials, a move Japan is likely to protest.

The 1.8-meter (5.9-feet) tall monument honors the freedom fighters of the Korean government in exile that were stationed in Xian in Shaanxi province, northwest China, as Japanese colonial rule of Korea (1910-1945) was nearing its end.

South Korean Minister of Patriots and Veterans Affairs Park Sung-choon and Wang Lixia, vice governor of Shaanxi Province, as well as Kim Yoo-gil, a surviving former liberation army soldier, attended the ceremony at around 10 a.m., in contrast to the dedication of the Ahn Jung-geun Memorial Hall in Harbin in January, which was held without Seoul officials present. Shaanxi Vice-governor Wang removed a red veil covering the black stone tablet to reveal white inscriptions in Korean and Chinese: “This stone monument is erected here in remembrance of a past when both Chinese and Korean nationals strived against Japanese imperialism and oppression.”

It also is inscribed that the headquarters of the Korean Liberation Army was established in Chongqing, China under the support of the Chinese Nationalist Party. The liberation army was established on September 17, 1940, in Chongqing, as the armed forces of the Provisional Government of the Republic of Korea. The slab is set in a 5.1-meter-high pavilion with four red-painted pillars and surrounded by lush gardens. The Korean government welcomed the monument for its “considerable historic significance.”

President Park Geun-hye initially asked Shaanxi People’s Congress Chairman Zhao Zhengyong and Shaanxi Governor Lou Qinjian to approve the establishment of such a monument during a visit to the former barracks of the army during her China summit last June.

At a summit in March with Park on the sidelines of the Nuclear Security Summit in The Hague, President Xi Jinping confirmed that the monument would be unveiled soon, as the two leaders demonstrated a united front on historical issues that have led to tensions with Japan. Xi said the monument and the Ahn Jung-geun Memorial Hall in Harbin “will contribute to the strengthening of relations between the people of our two countries.”

Independence fighter Ahn assassinated Hirobumi Ito, the first Japanese resident-general of Korea and a former Japanese prime minister, on Oct. 26, 1909, on a Harbin Railway Station platform. In an English report about the unveiling of the monument yesterday, Kyodo News described it as an “anti-Japanese monument.”

In January, Tokyo criticized the unveiling of the Ahn memorial hall, calling the independence fighter a “terrorist.”