North rents out waters near NLL

North rents out waters near NLL 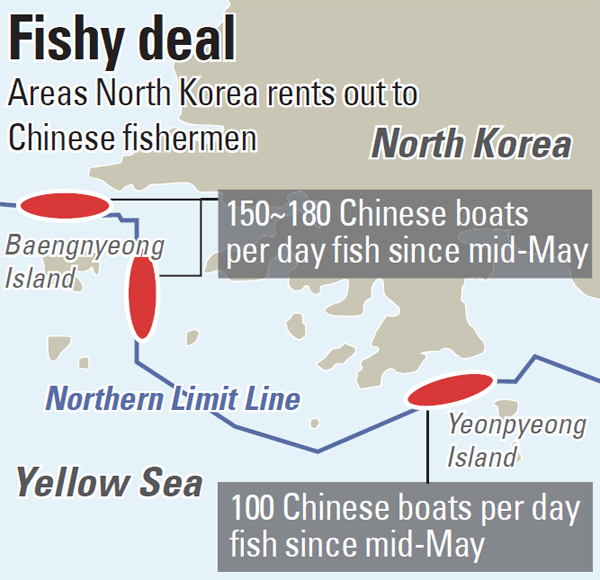 North Korea signed a contract with Chinese fishermen allowing them to fish in waters near the disputed maritime border including South Korea’s waters, sources told the JoongAng Ilbo yesterday.

The contract allows Chinese fishermen to work near the Northern Limit Line (NLL), the de facto maritime border between the two Koreas in the Yellow Sea, including South Korean waters below the boundary, Seoul officials said. In return for giving the Chinese fishermen the right to work in South Korean waters, particularly during crab and squid seasons, North Korea is paid a certain amount of money annually, officials said.

“As North Korea has expanded its joint fishery area with China [to the southern waters below the NLL], some Chinese vessels are moving southward more than they did before,” a South Korean government official said. “We are thinking of more active measures to keep them from violating the NLL.”

Officials confirmed that the South Korean waters allegedly being rented out to the Chinese fishermen were three areas north and east of Baengnyeong Island and north of Yeonpyeong Island. Under the alleged contract, several North Korean and Chinese vessels have recently worked together, officials said. Some North Korean fishermen were allegedly hired by the Chinese vessels’ owners as well.

“Last year, most Chinese vessels worked north of the NLL, but recently they worked very close to the NLL and some crossed the line,” a Korean Coast Guard official said. “So we dispatched additional patrol ships and special Coast Guard forces to the areas.”

The Korean Coast Guard seized a total of six Chinese boats that violated the NLL since May 19, including three 10-ton vessels on Tuesday. They said they also spotted about 100 vessels, assumed to be Chinese, near Yeonpyeong Island, and 170 near Baengnyeong Island, fishing in South Korean waters.

The South Korean government notified Beijing of the illegal fishing and called for them to stop, officials said.

“The Foreign Ministry and the Coast Guard told the Chinese Coast Guard officials about the contract that included our waters,” another South Korean official said. “We demanded the Chinese government warn the vessels not to cross the NLL.”

Military officials in Seoul raised concerns about the purpose of the contract. They say that the regime appears to be attempting to nullify the effectiveness of the boundary as well as to earn foreign currency.

“In the name of controlling the Chinese vessels, some North Korean patrol ships could cross the border or seize our fishing boats as well,” a military official said.