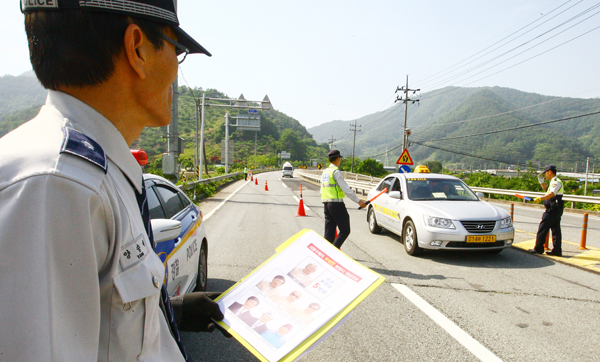 Policemen yesterday inspect every vehicle passing through Suncheon, South Jeolla, where the police are hunting for Yoo Byung-eun, the de facto owner of the sunken Sewol’s operator Chonghaejin Marine Company. By Oh Jong-chan

The Incheon District Prosecutors’ Office’s special investigation team sought a warrant yesterday to detain Lee Jae-oak, chief of the Hemato-Centric Life Foundation, on charges of helping Yoo Byung-eun, the businessman behind the company that owned and operated the Sewol ferry, evade arrest.

The 49-year-old CEO, who worked as a professor at Ajou University Hospital in Suwon, Gyeonggi, was arrested on Monday for giving substantial assistance to Yoo in his escape, including supplying him with food, a mobile phone under a borrowed name and getaway vehicles, prosecutors said.

Lee, an adherent of the Evangelical Baptist Church, more commonly known as Guwonpa, or the Salvation Sect, a Christian cult Yoo found and ran, is also suspected of embezzling foundation funds.

Officials assume that Lee is in a position of leadership in the sect given that he led its press conference last Sunday at its compound in Anseong, Gyeonggi.

Meanwhile, tips on Yoo’s whereabouts have risen dramatically to roughly 30 a day in Suncheon, South Jeolla, after the 73-year-old patriarch was found to have been in the area on Sunday, an officer from the Suncheon Police Precinct said.

Although some local news outlets reported that strangers were flocking to the southwestern city in hopes of winning the reward of 500 million won ($491,000) for details on Yoo’s whereabouts, the officer replied he wasn’t “so sure” about an incoming mob, implying that most of the tips the police precinct have received are from local residents.

When he was asked whether the tips are helping to find Yoo, the officer answered with a bitter “No, not really.”

The reward was raised from 50 million won ($49,000) on Sunday after critics argued the initial amount was too little.

The reward for serial killers is usually 50 million won.

Authorities are boosting their search in Suncheon, with approximately 1,500 officers searching around the shuttered Korean restaurant where traces of Yoo were last found.

Prosecutors are dispatching manpower to adjacent areas as well such as Gurye County, Boseong County, Jindo County and Yeosu, all located in South Jeolla.

As the search for missing passengers on the Sewol ferry continues in the southwestern sea, 288 have been found dead while 16 remain unaccounted for.