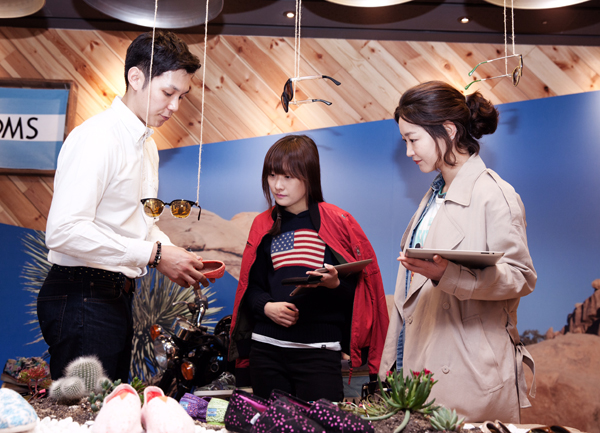 A salesman at a Toms Shoes store in Samseong-dong, southern Seoul, explains the brand initiative to customers. Provided by the company

“I bought a pair in the United States, where I came across the popular brand,” Eom said. “I very much like the initiative. Not only is the shoe my style but also it feels good to spend money not only for myself but for others as well. I feel less guilty.”

While the quality of life of many Koreans has improved in recent years, more consumers have become conscious not only of what they eat but also of what they buy and what impact their purchases will have on society and the environment.

“If you’re going to spend money, then why not spend for a good purpose and help others?” asked Lee Min-jeong, a 32-year-old consumer, who was browsing at a Toms store inside Coex mall in Samseong-dong, southern Seoul.

According to the brand, it has about 80 stores in Korea, up 10 percent from last year, and five more are planned to open this year.

Fashion brands are also taking an interest in consumers’ desire for “ethical spending.”

Since 2011, Uniqlo in Korea has collected old pants and shirts from its customers to recycle. Last year, a total of 30,000 clothing items were collected nationwide by its stores.

“This year, we expect the number to double,” said an official from Uniqlo.

“Our recycling campaign, for example in Japan, is very well-known and consumers are very active participants,” the official said. “More Korean consumers are taking part as awareness is growing.”

There is also a nationwide movement called “Mirinae” in Korea that is gaining attention among consumers. Mirinae in Korean means to pay in advance.

The movement started last year and more than 200 stores, including restaurants and coffee shops, are taking part.

Places that participate in Mirinae have a small box at the front of their store where consumers can create a coupon on which they write down the amount of the donation that they pay to the store owers in advance and what kind of menu items they would like to provide. The coupon is then placed in the box and can be used by anyone, from a university student on a tight budget to a homeless person who needs a meal. There are about 150 mostly Korean restaurants and cafes participating in Mirinae in Korea.

Mirinae is similar to the trend of “suspended coffees,” which has become popular worldwide. To participate in that scheme, a customer will pay for more cups of coffee than he or she actually wants and the remaining cups are donated when an individual enters the store to ask if there is any suspended coffee.

“This idea popped up after thinking about how there are many campaigns in other countries where individuals spend for others as much as they spend for themselves,” said Lee Joon-ho, the movement’s founder. “When this movement started a year ago, there were only 10 stores that participated.”

GS Shop, a local home shopping company, is also seeing an increase in sales of products made by social enterprises and fair trade organizations. It has been selling fair trade products since 2010 and sold about 12,000 of the products last year. Sales doubled in 2013 compared to the previous year. For example, last February, more than 2,000 packages of cookies made by mentally-ill people were sold in just 30 minutes.