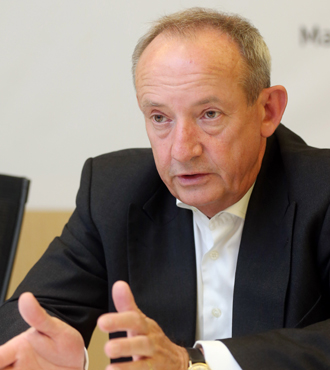 Korea is set to implement a carbon trading scheme next year, an important step in reducing its carbon footprint despite objections from construction conglomerates.

Although Korea’s effort may not be as aggressive as that of European countries, the carbon trading scheme is considered to be a large step forward.

Yvo de Boer, a former executive secretary of the United Nations Framework Convention on Climate Change, is the new general director of GGGI.

The Korea JoongAng Daily sat down with de Boer to discuss the institute’s work.

Q. What are the main initiatives of the GGGI?

A. Many people talk about the concept of green growth and sustainability but only a few people understand what they really mean and how things can be done. So, the Global Green Growth Institute is intended to help developing countries design policies that can help them become greener economies. More specifically, we help them process risk and analyze energy policies, transport policies and economy policies.

How many countries participate?

Could you describe the major achievements of the GGGI?

In Ethiopia, we have been successful in helping the government establish a Climate Resilient Green Economy, an institution that attracts international and national finance for green economy investment. The institution aims to build a society that is able to withstand the shocks and stresses caused by a changing climate.

There is a wide range of environmental issues facing the world. Which type of issues are the GGGI primarily concerned with?

We focus on a number of issues. For example, we focus on climate, energy, transport and cities. Those sound like four different topics, but they are actually four related topics. If you have a successful transportation system, it is good from a climate change point of view. And if you build more energy-efficient cities, it will be good from the energy point of view.

Korea plans to adopt a carbon trading scheme next year. What do you make of it?

I think there are still a lot of opportunities to improve efficiencies in the Korean economy. By putting a price on emissions, you actually create the incentive for companies to become more energy efficient. If they have targets to reduce carbon emissions by a certain amount, they will likely reduce more and become conscious about the amount of energy and resources they use. Many countries in the world are creating a carbon trading scheme in the same way as Korea. This is up and running in Europe, and China is working on something similar. India has a renewable energy certificate system. So, more and more countries are looking at how we can use market incentives to reduce carbon emissions.

Who provides advice for developing countries?

We have experts in different areas including transport, urban issues and water. Basically, we have programs and teams of experts on the ground helping developing countries. In the headquarters in Seoul, we provide support and know-how.

What kind of issue is particularly urgent for Korea?

I think industrial energy efficiency is very important for Korea. There is still a lot that Korean people can do to improve energy efficiency. For one thing, I think energy is too cheap in Korea. So we can adjust the prices to ease the waste of energy. I think the idea of electric cars is fantastic.

But electric cars can be difficult in this country because there is no infrastructure. So, if the city of Seoul wants to create and stimulate electric vehicles, the first thing that they need to do is to establish charging points.