Horsing around at Korea’s riding facilities

Horsing around at Korea’s riding facilities 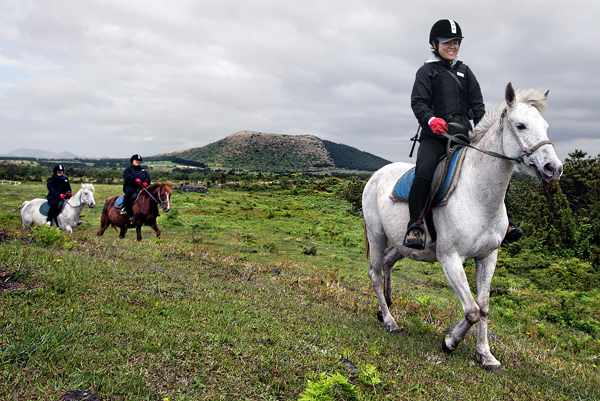 From the forest to the hills, riding on Jeju Island is a healing experience like no other. By Ahn Sung-sik

They say that once a nation’s average household income exceeds $20,000, horseback riding becomes a mainstream sport.

The planned expansion of the equestrian industry kicked off in 2012 with a five-year plan, and the government intends to increase the number of people that ride as a hobby to 100,000 by the year 2017.

Construction of equestrian-related infrastructure is included on the agenda. The target for horse-riding facilities is set at 500 (there are 366 now), and the authorities hope to take the country’s 680,000 one-off riders to two million.

The reason behind the government’s ambition is simple: The side effects that spill over from commercializing the horse-riding industry could result in a lot of cash.

For every horse, 4.8 jobs are created on average. In the United States, where there are 9.2 million commercial horses, the money generated from the industry is close to 126 billion won ($123 million). In Japan, too, there is a large financial flow from the country’s 80,000 commercial horses.

Compared to these two nations, Korea has been slow to take up equestrian sports. The main reason is that the masses think riding is too costly.

Although the government is offering several incentives and riding prices have decreased as of late, not many know that horseback riding is cheaper than ever.

Riding is an intense exercise with numerous health benefits. According to a Yongin University study conducted in 2010, riding at a rapid pace for 45 minutes burns the same amount of calories as in a game of tennis.

Riding is a sport where you commune with an animal and is thus good for one’s emotional well-being. But even without the benefits, first and foremost, it’s a fun activity. 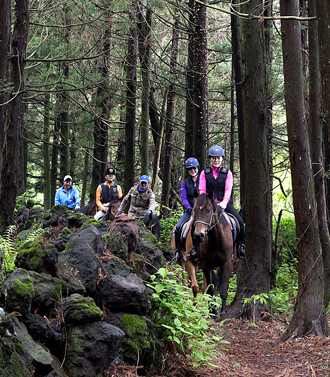 Riders go through the Japanese cedar forest and toward Nokkome Hill on one of the two “healing trails” launched by the Jeju Tourism Organization.

In January, the island was designated as a special horse industry zone, meaning that the government will invest in developing the area’s equestrian business. A budget of more than 86 billion won has been set aside.

As one of the first initiatives, the Jeju Tourism Organization, in conjunction with Jeju University, has launched two packages with a focus on the “healing” aspect of traveling via horseback.

The Jeju Horse Riding Park in Jangjeon Town, meanwhile, is offering a program to give riders the opportunity to explore the beauty of the Gotjawal Forest.

Once we were dressed in protective gear, the instructor quickly demonstrated how to handle a horse with a bridle. Then, after circling the track three times, we set out into the wilderness.

As soon as we left the track and reached the prairie, the horses didn’t waste any time getting down to business: They started grazing.

The instructor gave extra attention to novices, but as we had to go at the same pace as the teacher, it wasn’t long before we were cantering.

The speed was rather overwhelming for a beginner, and because we had to try with all of our might to stay on top of the animal, it was quite a workout.

After 20 minutes of cantering, we were back to trotting at a leisurely pace to take in the scenery.

There are four speeds to note when horseback riding: walking, trotting, cantering and galloping.

The most scenic experience is to be found at a slower place, where you can see both Nokkome Hill and Gwamul Hill come into view.

After the prairie comes the Japanese cedar forest. The path between the trees looks narrow, but the horses know their way around.

Although the average temperature for the day was around 20 degrees Celsius (68 Fahrenheit), in the forest it was a lot cooler, which was refreshing after the workout that came before it.

An hour goes by in a flash when on horseback, and it’s not hard to see why it is a popular pastime.

The horse picnic plan is the more leisurely paced “healing” package of the two offered.

Rather than the horses, the focus of the trail is on enjoying a meal alfresco.

In between slow rides, participants are given breaks where they can dismount and feast on sandwiches, coffee and fruit.

The course is based at the Ddarabi Riding Center located inside Jeju Horse Park in Seogwipo. The trail and the trek is a 13-kilometer (eight-mile) journey.

Riders meander to Beonnul Hill and back to the park.

Instead of ponies, which the park is named after in Korean, Halla horses (a cross between the Jeju pony and international racing thoroughbreds) are stabled there.

A Halla horse is about 30 centimeters taller than the average Jeju pony and is more mild-tempered than the thoroughbreds.

“Traditionally, Ddarabi Stables was where horses for Joseon kings were raised. It’s a lot bigger, and flat compared to other parks,” said Jung Kye-young, a representative from the park.

Once on the trail and some four kilometers away from the park, you come across a Japanese cedar forest, followed by a wheat field and a cypress forest.

The trek takes an hour to complete and is perfect for beginners or for family outings.

Here is a quick tally of how much horseback riding will set you back.

Rides at private facilities cost around 100,000 won. But booking through Horsepia (www.horsepia.com) will get you at least a 37 percent discount.

There are around 110 facilities listed on the website, and selecting a date and venue ahead of time is simple. With consideration to factors such as the applicant’s age, among other things, the Korea Racing Authority will subsidize the riding centers for discounts given.

The website launched in 2011, and every year around 7,000 people receive significant discounts.

The KRA also offers 20 percent discounts on riding lessons for school-aged children. This year alone, it plans to give incentives to some 12,000 students.

Riding gear is free to borrow at the facilities, but for those who want to purchase their own helmets, vests and boots, prices stand at around 200,000 won per item. Riding pants are around 100,000 won. Jeans are also a suitable option, as are sensible winter boots and sneakers. 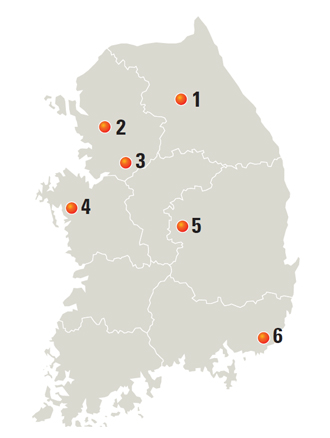 There are around 366 horseback riding facilities in Korea. Although previously thought of as being small and low quality, the riding centers have recently undergone transformations.

Here are six of the best.

This facility, opened by DaeMyung Resort last month, caters to riders of all levels.

Operated by the Korea Racing Authority, Lets Run Park is the nation’s finest facility, with more than 200 horses as well as some of the best instructors in the country.

A 15-lesson package costs 900,000 won and lessons last about an hour to an hour and a half. Programs for teenagers go on for longer - at one hour 50 minutes - and consist of 30 lessons.

The meadow surrounding the National Cooperative Agricultural Federation riding facility is vast. Although it is based in Gyeonggi, the experience is akin to riding in Jeju.

Because Hongseong is a renowned riding facility throughout Chungcheong, it is perfect for beginner and intermediate riders. It also includes a rehabilitation riding course for the disabled. Lessons cost 20,000 won for 30 minutes or 180,000 won for 10 lessons. Call (041) 630-9700.

Run by the local government, the Sang Ju center is on par with private international riding centers, and more than 100 horses are stabled there. Lessons cost 20,000 won for 40 minutes or 180,000 won for 10 lessons. There are specific riding programs offered for government workers. Call (054) 535-5634.

This facility, located next to the Busan racetracks, is run by the Korea Racing Authority. Beginner classes are available only on weekends, while intermediate lessons run during the week. Lessons cost 50,000 won for two hours. Call (051) 901-7427.