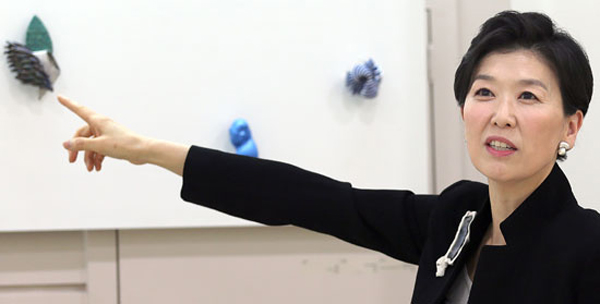 In 1993, a piano was rolled into a corner of a mutual credit finance branch in Seoul. Employees with hidden talents were encouraged to sing, and the first concert featured employees dressed in company uniforms.

The idea for the glee club originated with Koo’s husband, the late Choo Jin-kyu, former chairman of the financial group. Choo was a bookworm with a doctorate in economics from the University of California at Berkeley. In his younger years, he had a lot of interest in the arts and the classics. His widow recounts that he would sneak into those kinds of classes from time to time.

She says that even today, each and every employee participates in the group in some way.

“As employees from different branches gather to practice, a community mentality is naturally formed,” Koo said.

After her husband passed away during a family vacation in 1999, Koo took charge of the business.

She is the daughter of the late chairman of energy conglomerate E1, Koo Pyong-hwoi, while her late husband was the second son of Joo In-yong, founder of food conglomerate Sajo Group.

When Koo’s husband died, the couple’s son was in high school and their two daughters were in middle and elementary school.

“Mothers are strong,” Koo says, “and it came to be that I had to pull myself together.”

In the early 2000s, major mutual credit companies were in crisis as one after another were suspended. In her own effort to save the company, Koo dug into her own pockets to purchase financial products in order to increase the overall deposits of the savings bank.

“My father bought the shares when their price was relatively high,” Koo says, “and afterwards, when the price dropped, he complained that he suffered losses because of me.”

Although she didn’t expect to be placed in charge, Koo says the financial business, which is a constant struggle with numbers, actually suited her meticulous and strict personality.

She says when she was young she was a model student who followed the school’s rules because she didn’t like sticking out.

“In my lifetime I have never been late or absent,” Koo says. “I was the kind of girl who had to get all the answers right on the written exam for my driver’s license.”

After getting a bachelor’s degree in English literature at Ewha Womans University, she earned her masters and doctoral degrees in educational technology at New York University and Ewha.

She says that listening to music and viewing art helps her escape from duller routines.

She says she enjoys operas and plays but prefers the cheaper seats located next to the VIP section. She says she looks for performances that have been playing for a while as there’s a possibility of getting discount tickets.

Her friends call her frugal.

Koo said the Pureun Chorus feels like family since she’s been playing with it for two decades. The chorus performed on Saturday last week at KBS Hall in Yeouido, Seoul, to celebrate its 20th anniversary.

“Watching employees’ children grow up makes me feel like part of one big family,” Koo says.

Before the concert on Saturday, Koo said she hoped that the concert will serve as an opportunity for the families of the performing employees to feel proud.

Last month, Koo’s son joined the family business and now works in the same building as his mother.

“Because my son joined the company while we were already in the middle of practices, he didn’t join us on stage this year,” Koo said. “But next year he has to sing with us.”