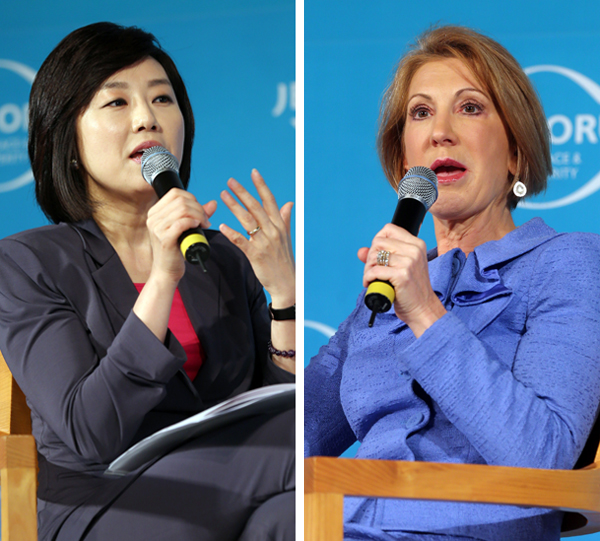 JEJU - Carly Fiorina, former chief executive officer of Hewlett-Packard, is a very relevant figure to discuss the issue of women in leadership positions. She was the first woman to lead a Fortune 20 company. Likewise, Minister Cho Yoon-sun from the Ministry of Gender Equality and Family had to struggle in a male-dominated field when she worked as a lawyer.

Yesterday, the two women sat down together at the Jeju Forum for Peace and Prosperity to share their views about what constitutes good leadership and the need to bring more women into the work force.

“Women are the most underutilized resource in the world,” said Fiorina. “That’s an economic fact. It will be smarter if we tap everyone’s potential, including women.”

“As a minister of gender equality, one of my primary goals is to get more women involved in the job market because women’s participation is beneficial to society,” the minister said.

Fiorina said women’s strong point is their inclination to collaborate.

“I am always uncomfortable to make a distinction between male and female leadership, but if I have to mention something, I would say that women tend to seek collaboration with others. That’s a strong point in women,” she said.

However, she acknowledged that there is a long way to go to help women fulfill their potential.

“People tend to assume that male leaders are competent. But, in case of women, they have the additional burden to prove they are competent,” Fiorina said.

The two women also talked about general leadership and what makes a person a good leader.

When Cho asked Fiorina her opinion about the criteria to become a good leader, Fiorina said a good leader must see potential in employees.

“Leaders must see potential in people and tap and unlock the potential,” she continued, “When I worked as a secretary in a small firm, two men approached me and suggested that I could do something beyond typing and filing, and that’s the beginning of how I worked my way through to become the chief executive of HP.”

The session was held on the last day of the forum, which was hosted by the Jeju Special Self-Governing Province along with the International Peace Foundation, East Asia Foundation and the JoongAng Ilbo, under the theme “Designing New Asia.”

The topics included tension on the Korean Peninsula. The ninth Jeju Forum that kicked off Wednesday at the Haevichi Hotel and Resort on Jeju Island brought together more than 3,000 participants.