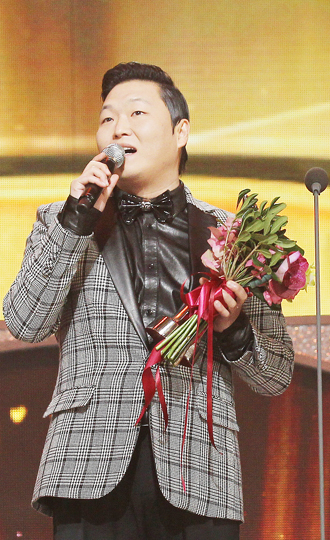 With the music video for Psy’s hit “Gangnam Style” surpassing the two billion mark on YouTube on Friday, the singer is back in the limelight with his upcoming new release “Hangover,” according to local media yesterday.

Psy explained in a video interview with U.S.-based celebrity news website TMZ on Saturday that while his previous hits like “Gangnam Style” and “Gentleman” were mid-tempo tracks, “Hangover” will be a “totally hip-hop thing” where he will rap with Snoop Dogg’s help.

When asked about what it was like to work with Snoop Dogg, the 36-year-old singer answered “We were hanging over,” adding that although they didn’t have enough time to get together while shooting the music video due to the tight schedule, working with him was “really great.”

The singer’s agency, YG Entertainment, announced that Psy will appear on U.S. talk show “Jimmy Kimmel Live: Game Night” on Sunday with Snoop Dogg. They plan to unveil the music video for the new release.

Psy, the unlikely star, holds the record on YouTube for most overall views for “Gangnam Style” and most views in a day - 38 million - for the follow-up, “Gentleman.’’

No other video comes close to “Gangnam’’ on the streaming service’s list of top videos. Justin Bieber’s “Baby’’ is the only other billion-plus video at 1.04 billion views. Cute kid video “Charlie bit my finger - again!’’ is a distant third with 711 million views.

Psy has three of the top 15 videos on the site.