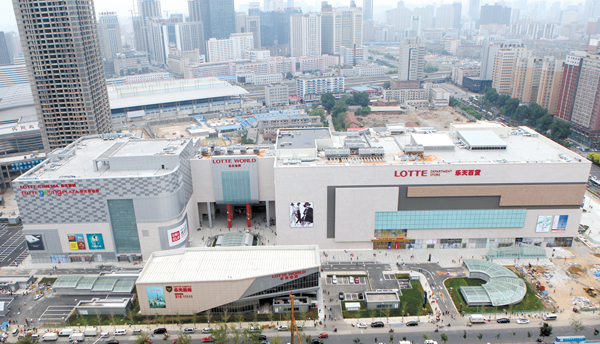 An aerial view of Lotte Department Store and Young Plaza, which opened May 31 in Shenyang, northeastern China. Provided by the company

Shenyang is located in Liaoning Province, one of the biggest provinces in Northeast China. The city is 21 times bigger by area than Seoul, with 8.2 million residents. Its GDP per capita is 14 million won ($14,180), which is the highest in northeastern China.

Shenyang Lotte World is Lotte Group’s first collaborative project in China, which adds up to 3 trillion won. This is the biggest investment Lotte Group has ever made on an overseas project. The department store, Young Plaza and cinema will open first. Lotte Mart will open in 2015 and the opening of the shopping mall and theme park will follow in 2016. Finally, the hotel, offices and apartments will make up the final 286 acres of Lotte Town in China. The town will be 1.4 times the size of Lotte World Tower and Mall in Jamsil, southern Seoul.

The department store expects synergy from working with other subsidiaries to become a landmark in northeastern China.

The new department store is the largest among Lotte’s Chinese branches. The building has eight floors with a total floor area of 122,000 square meters, or 30 acres. More than half of the area is dedicated to shops featuring 420 brands.

Young Plaza was designed for Shenyang residents under the age of 35, which is about 40 percent of the total population. The plaza is located near 70 schools, including four universities, and offers fashionable brands especially for younger customers. Global specialty retailers of private-label apparel (SPA) brands such as Uniqlo and QDA, and Korean brands that are popular to Chinese customers such as Teenie Weenie and Basic House, take up the first three floors. The rest of the space is assigned to Lotte Cinema, which has 16 theaters. The multiplex houses 3,000 seats, the biggest number of seats in the area. A Samsung IT store is also located on the first floor of the plaza.

The Shenyang branch also provides Korean beauty brands such as The Face Shop and Skin Food, which offer moderately priced beauty products the opportunity to compete with global cosmetic brands. In addition, the store introduces local customers to Cuckoo, the brand behind a famous rice cooker popular among Chinese tourists in Korea.

Lotte Department Store plans to use Hallyu, or the Korean Wave, to promote its Shenyang branch. The department store’s exclusive model, Kim Soo-hyun, who starred in the popular drama “My Love From the Star”, greeted fans during a meet-and-greet on the store’s opening day. The store also gave out prizes to customers, such as a visit to the drama’s set.

“The Shenyang Lotte World is the project Lotte subsidiaries cooperate with their maximum capabilities,” said Lee Won-joon, president of Lotte Department Store. “It will become the strategic example for future international expansions.”