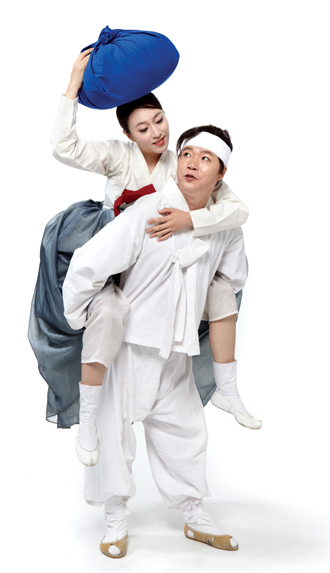 “Madame Ong,” an opera based on a folk tale starts at the National Theater of Korea on June 11.Provided by the organizer

When Koreans hear the name Byun Gang-soe, they instantly think about a man with a legendary libido. This womanizer is the main character in Korea’s adult folktale “Byun Gang Soe-jeon” of the Joseon Dynasty (1392-1910). Then there’s Ongnyeo, or Madame Ong, described as a lewd woman about town.

As every man who has sexual intercourse with Ongnyeo dies, one after another, she gets kicked out of town. She later meets Byun and settles down on Mount Jiri.

Unlike other men, Byun, who is known for his strong sexual stamina, does not die, and Ongnyeo feels like she has finally found the love of her life.

But Byun gets into trouble by cutting down the jangseung, or traditional Korean totem poles, that are often erected at village entrances, for wood. He makes the jangseung spirits mad and ends up dying.

As the story focuses heavily on sexual relationships between men and women, the tale, which was written as a pansori (traditional narrative song), was considered too dirty and obscene and has been particularly undervalued as a result.

In an attempt to “recover its damaged reputation,” Kim Sung-nyo, the artistic director of the National Changgeuk Company said playwright and director Ko Seong-woong rewrote the story into a changgeuk, or traditional Korean opera, called “Madame Ong,” with musical director Han Seung-seok.

Ko is known for giving existing works a twist and turning them into hits.

So far, plays, films and pansori performances based on the tale of Byun dealt heavily with the figure of the womanizer. But Ko said he wanted to “put a period on Byun Gang-soe and turn the attention to the woman named Ongnyeo.”

In “Madame Ong,” Ongnyeo is the protagonist. She is depicted not just as lewd but also as obedient and passionate. In the original story, she is helpless when Byun is struck with illness and dies soon after. But in the newer version, Ongnyeo declares war with the jangseung spirits that drove her husband to death.

“When I read the original work, I thought it was suggestive, however it was elegantly constructed,” said Ko. “I realized how Ongnyeo could also be a protagonist who can make the original story more interesting.”

Ko said the original story has a weak ending, so he strengthened it with humor.

“Working with Han was great,” said Ko. “He realized the changgeuk that I’ve pictured only in my head. I think we didn’t even discuss that much. He wrote the lyrics and music, I listened and I loved it.”

“Madame Ong” is the third of the National Changgeuk Company’s seven-part series adapting existing works into changgeuk to promote the “beauty and uniqueness” of traditional Korean performance.

“When I heard from director Ko that he’ll rewrite the story of Byun Gang-soe, I uttered yells of delight,” said Kim. “Artists like myself, we have what’s called a ‘feel.’ I ‘feel’ that this story will be told in an unimaginable way from the perspectives of the young playwright and directors. I am certain that it will propose new vision to the genre of changgeuk.”

“Usually, when reading the screenplay, it takes me a while and sometimes I read a few paragraphs again to really get it,” said Kim. “But I just read through from page one to the end with this one. It’s so fun I can’t wait for it to be staged.”

Kim’s confidence can be seen in the staying power of the show. A changgeuk is usually staged for three days, but “Madame Ong” will be staged 23 times between June 11 and July 6.

“Not only the usual changgeuk fans but also musical fans and theatergoers will be attracted to this performance,” said Kim.

“We’ve never staged one changgeuk for such a long time but it’s our daring decision. I trust the Korean audience.”

The show will still be explicit in portraying sexual intercourse, and Ko said there will be more scenes showing Byun Gang-soe and Ongnyeo conversing about it.

“Madame Ong” has an age limit of above 18. The show, which kicks off June 11 and runs through July 6, starts at 8 p.m. on weekdays and at 3 p.m. on weekends. There are no performances on Mondays.

For people whose name includes the Korean letter “ong,” a 50 percent discount is available.