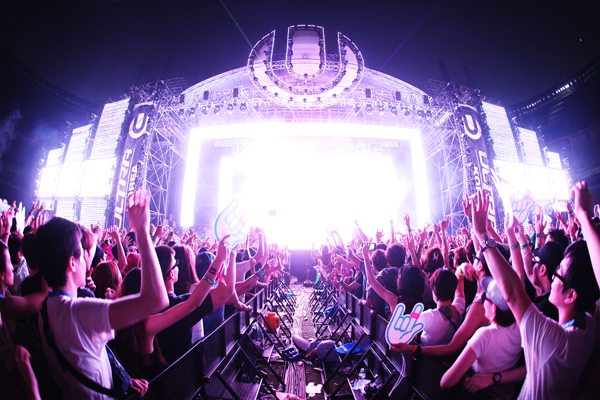 The third Ultra Korea, the Korean edition of Miami’s Ultra Music Festival, will kick off its two-day event on June 13.Provided by the organizer

Many music festivals have been established in Korea in recent years, yet these are mostly centered on jazz, rock or indie genres, forcing the country’s electronic music fans to stay underground.

But thanks to Ultra Korea, which started in 2012, electro lovers can now embrace the great outdoors.

Celebrating its third year, the Korean edition of Ultra Music Festival, originally based in Miami, is holding its two-day party on June 13 and 14 at the Jamsil Sports Complex in southern Seoul.

EDM addicts can look forward to this year’s festival, as the lineup is indeed international. Some of the headliners include English trio Above and Beyond, American electro-house musician Steve Aoki, Australian duo Empire of the Sun and Bloody Beetroots from Italy, who will headline the first day of the festival.

Park Myung-soo, the 44-year-old comedian, recently made a debut as a DJ and will appear as G.Park on the first day of the festival.

The EDM scene in Korea has been growing, attracting more and more music fans in Korea. Despite the fact that the festival’s first foray in Korea was in 2012, it attracted about 500,000 people, according to its organizers.

This year, festival organizers said they will also hold an after-party at the five-star Sheraton Grande Walkerhill’s outdoor swimming pool.

The additional event, created by Ultra Music Festival’s Korean organizers, is as highly anticipated as the festival itself because some of the artists will attend, likely in swimwear.

According to the organizers, artists like Sick Individuals, Nic Fanciulli, Ale Mora and Raiden, as well as Brass Knuckles and Los de la Vega, will join the pool party on June 15 and will “continue on the festive fever to the third day.”

Korean hip-hop group DJ Doc, famous for turning concerts into parties, is also invited to “uplift the atmosphere and make sure Koreans experience ‘the party,’?” said the UMF organizers.

Pool party tickets cost 40,000 won and can only be purchased by those who bought festival passes.

VIP tables for six or 10 people, which include event tickets and drinks, are sold out, but VIP tables that seat eight are currently available.