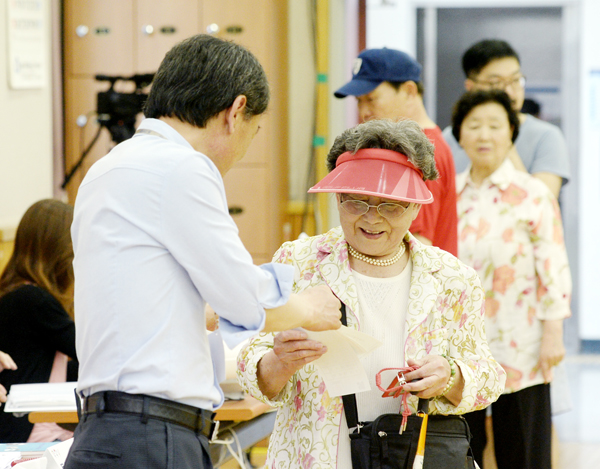 The June 4 local elections recorded the highest turnout yet for early voting at 11.49 percent, with unexpectedly active participation from young voters in their 20s.

According to the National Election Commission yesterday, about 1.16 million out of more than 7.3 million eligible voters between the ages of 19 and 29 cast their ballots in the two-day-long early voting that was held over the weekend, making up 15.97 percent of total votes.

The turnout was much larger than the average seen in two by-elections in April and October 2013, which both only hovered around five percent.

The state-run election watchdog said that the higher turnout of young voters is mainly because of the involvement of those serving military duty.

“Given the previous early votes, there was a high participation from the voters serving military service, and during this early voting, about 320,000 soldiers and policemen requested for campaign leaflets to us,” the commission said in a press release yesterday.

“The high turnout of voters in their 20s appears to be a result of the participation by people under the military service.”

Geographically, the highest turnout in the country was in Gangwon, at 14.24 percent, followed by 13.28 percent in Gwangju in the Jeolla region, and 13.31 percent in North Chungcheong. Seoul recorded 11.14 percent and Gyeonggi logged 10.31 percent.

The opposition New Politics Alliance for Democracy welcomed the high turnout, particularly from younger voters, as they are generally known to be more liberal, like the party itself.

“The high turnout reflects public rage over the incompetence and irresponsible attitude of the Saenuri Party-leading administration surrounding the Sewol ferry tragedy,” Sohn Hak-kyu, the leader of the NPAD’s campaign headquarters, said at a party meeting yesterday.

But the ruling Saenuri Party, which historically receives strong support from older, conservative voters, expressed concern about the turnout of young voters.

“In short, it is a crisis,” Park Dae-chul, a spokesman of the party, told reporters yesterday. “The situation is getting worse to us with the increased turnout of young people.”

But some analysts say that the high turnout of young people shouldn’t be a worry for the ruling party.

“The people in their 20s these days are very realistic, struggling to survive by studying for a high-profile career from their childhood,” Hong Hyeong-sik, a poll analyst, said. “Including those in their 30s, they have relatively less interest and expectation in politics, so we can’t say they are mostly liberal.”