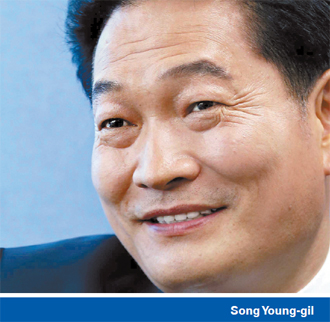 Incheon Mayor Song Young-gil of the main opposition New Politics Alliance for Democracy (NPAD) is running for another four-year term. He exuded a sense of urgency about it when he sat down with the JoongAng Ilbo last Monday.

“The first four years was the time to plant seeds, dealing with problems and liabilities that the former mayor left,” said Song. “Now I would like to show fresh sprouts and their growth.”

Asked about his challenger Yoo, Song replied, “Can Yoo speak plainly to the president? To bring about success, a man like me is the better partner to run a government, not someone who accepts the words [of the president] without questions.”

Q. What do you think of the negative attacks among candidates?

A. We are not doing any of those negative attacks. Is blaming the former Safety and Public Administration Minister for the Sewol ferry accident a negative attack? On the contrary, Yoo’s camp is wasting a great deal of fliers to perpetuate a lie.

Yoo is claiming that the debt of the Incheon government rose to 13 trillion won ($12.7 billion) from 7 trillion during your term.

That is the lie I am talking about! When I was elected mayor, the debt left by the former mayor from the Saenuri Party was 7.4 trillion won and it has grown to 9.4 trillion so far. As the accounting standard changed in 2012, we were required to add operational debt along with financial debt on the financial report, and the total amount on paper increased from 9.4 trillion to 12.6 trillion. But Yoo is falsely arguing that I have increased the debt by using double standards and rounding off.

Did you explain this to Yoo?

I explained it using tables when we met in person. He nodded his head and said, “Yes,” but he keeps saying it.

Isn’t it true that the Incheon government owes a lot?

I couldn’t even sleep worrying about it. I cut my monthly salary by one million won and my family and I live in a rented apartment with key money of 140 million won. Feeling responsible for the huge debt, I have commuted by subway for four years and flown only in economy class when going on business trips.

Fortunately, we sold the Incheon Terminal Complex at a high price and could solve the problems of double-entry book keeping. The size of debt began to shrink for the first time in three years, and we even ended a year in the black.

Are you satisfied with the city administration over the last four years?

I am proud that we succeeded in bringing the Green Climate Fund to Incheon and topped the rest of Korea for the amount of foreign direct investment in 2013. Other events that made me pleased were converting temporary positions in the city government into salaried positions, which we did earlier than Seoul, and turning the shantytown in Manseok-dong into modern housing so that the residents could live in a better condition.

It is the economic capital city. We can’t just beg for money from the central government. Incheon must be an international city with foreign investments and people. If Seoul is Washington D.C. or Beijing, Incheon can be another New York or Shanghai. Incheon can be another Marina Bay Sands [an integrated resort in Singapore], or may turn into a place that can realize the creative economy initiatives. Given that North Korea also announced that it is participating in the Asian Games, we can say we have contributed to the trust-building process on the Korean Peninsula. I would be a great partner for the Park administration.

Some say Incheon is not favorable to locals.

It is certainly getting better. When it comes to education, children from the upper class and celebrities are attending Chadwick International, which opened shortly after my tenure. It is the first time high class parents are sending their children outside of Seoul for education. Incheon is now as good as Seoul, Beijing and New York for raising kids.

Incheon seems to be always under construction.

Incheon is on a different level of development to Seoul. Seoul has completed establishing its infrastructure, but Incheon is still working on the second subway line. I have focused on attracting investments because I wanted to develop culture, welfare and education in the city while building up the infrastructure at the same time. I have dealt with the Incheon government’s debt, achieved 6 trillion won of investment and prepared for the Asian Games for the last four years. Now I am confident of keeping up the momentum of those investments.

Do you think it would be easier to get financial support from the central government if the mayor has a close relationship with the president?

Anybody can say they are going to do something. Yoo said he ‘gave up’ positions of minister and lawmaker. Then is Incheon mayor not as good as those positions?

The NPAD leadership says the local elections will be a referendum on the incompetence and irresponsibility of the Park administration.

I wish success to the Park administration. But the problem is there is no one who can discuss issues with the president on a basis of equality. They just figure out how the wind is blowing and communicate indirectly with her. That’s why the Sewol ferry accident was reported to the president eight hours later.