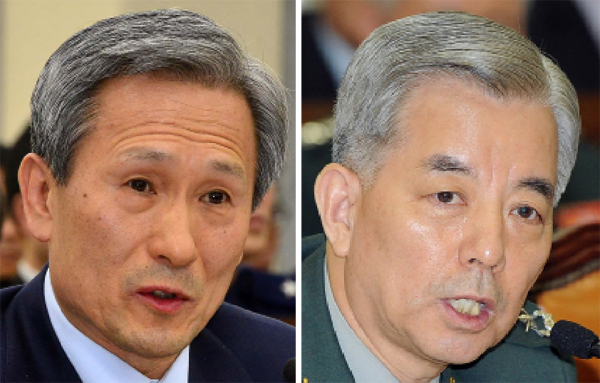 Unlike Kim, who will be a presidential office staff, Han’s nomination must be approved by the National Assembly. Kim will also assume the post as head of the National Security Council (NSC), a standing unit under the NSO.

Kim, 65, is a longtime defense minister who took office in December 2010 under the Lee Myung-bak administration in the wake of North Korea’s deadly shelling of Yeonpyeong Island.

Born in Jeonju, North Jeolla, he also is known as a schoolmate of Kim Jang-soo, a close aide to Park and former chief of the NSO who attended the Korea Military Academy.

He is the first defense minister to retain his position in two presidential administrations. Kim initially was to be replaced by Park’s nominee, Kim Byung-kwan, but Kim withdrew amid questions concerning his assets.

As North Korea continued provocations under Kim Jong-un, Kim has maintained his hardline stance toward Pyongyang. He publicly vowed to “strike the epicenter of the provocation,” “target the leadership [of North Korea],” and “firmly retaliate” against provocations.

“He will make a full commitment to his duty as NSO chief after his experience in policy making for national defense, foreign affairs and unification issues as a member of the NSO and by working as defense minister over the past four years,” Min said.

North Korea has criticized the defense minister for his stern responses to threats, calling him “a super-class warmonger” and “the first target to be mowed.”

After his name surfaced as a possible nominee for NSO chief last week, the North’s Committee for the Peaceful Reunification of Korea warned Friday it would not let Kim “crazily run amok.”

The nomination of Kim as the top security adviser in the presidential office comes after a string of provocations from North Korea: artillery shelling on South Korean naval vessels in the Yellow Sea, anti-South propaganda in the wake of the tragic sinking of the Sewol ferry and an accord on abductee issues between Pyongyang and Tokyo.

Kim Jang-soo, former NSO chief, and Nam Jae-joon, former National Intelligence Service (NIS) chief, stepped down in line with the president’s desire to clean house in the wake of the Sewol sinking.

Min said the Blue House is reviewing the qualifications of possible candidates to head the NIS.

Until the new defense minister is approved by the National Assembly, Kim will continue as defense minister and take on the duties of NSO chief at the same time, according to the Blue House.

Han, 63, “specializes in policy making and strategic thinking” and has “full various experiences and opinions on the field army,” according to the Blue House’s Min.

Born in Cheongwon, North Chungcheong, he has been Army chief of staff, capital defense commander and chief representative for military talks with North Korea.

As chairman of the Joint Chiefs of Staff, Han came under fire in November 2010 when the artillery shelling of Yeonpyeong Island occurred. He reportedly told South Korean soldiers to “fire only 20 shots” toward the North, drawing criticism for a weak response to the attack.

In a telephone interview with the JoongAng Ilbo yesterday, Han said he would never “be soft” in dealing with North Korea.

“Do you think I am soft?” he asked. “Of course, there are various positions in perceiving North Korea, but I would work on my basic duty by regarding North Korea as an enemy of the state.”