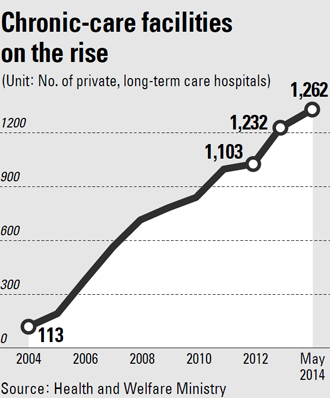 The fire at a long-term chronic care hospital in Jangseong, South Jeolla, has put a spotlight on lax management at private facilities, which have mushroomed over the past decade.

In 2004, there were only 100 private, long-term chronic care hospitals in Korea. As of May 28, according to government data, the number had grown to 1,262. The government encouraged smaller private hospitals to dedicate themselves to chronic care, usually of the elderly, by offering loans at low interest rates. It was a simple solution to the ever-increasing need for care of senior patients in a rapidly aging society.

Under the law, such hospitals are supposed to be equipped with facilities and medical staff to treat older patients with chronic diseases. Health insurance covers many costs and patients pay monthly fees of around 1 million won ($980).

But with the rapid expansion has come short cuts and corner cutting and management quality can be spotty.

The only monitoring of chronic care hospitals is done by a certification institute under the Ministry of Health and Welfare. Assessments are done on 203 issues and the hospitals either pass or fail. The system was launched last year and assessments are good for four years.

Hyosarang Hospital, where 21 elderly patients were killed and 10 injured in a fire suspected to have been set by an 81-year-old patient suffering from Alzheimer’s disease on Wednesday, passed the test last December. The hospital received a “no problems” evaluation in another safety checkup by the Health Ministry and South Jeolla provincial government conducted May 21 - a week before the fire.

The assessments done by the Health Ministry agency are not even compulsory. Only hospitals that apply for them are tested. Only 255, one fifth of the total number of such facilities, asked to be assessed. None failed.

In fact, Hyosarang was one of the first to have been tested. Given the fatal tragedy that followed, the quality of the assessments are now being questioned seriously.

Warnings that private hospitals are vulnerable to fires have been long and frequent. In 2010, a fire at a care center, which is a cheaper version of a long-term care hospital, in Pohang, North Gyeongsang, fatally suffocated 10 senior citizens. After that fire, the government required fire sprinklers at all senior citizen facilities but the Health Ministry did not include chronic care hospitals.

“An amendment to the Fire Services Act to force chronic care hospitals to install sprinklers has been proposed,” said Jeon Byung-wang, an official at the health and medical policy department of the Health Ministry.

Experts say similar accidents will happen in the future unless more robust safety measures are required at care hospitals.

“Care hospitals should have separate wards solely devoted to Alzheimer’s patients,” said Kim Gi-woong, head of the National Institute of Dementia. “For that, the government should invest further in those hospitals.”

Health Ministry officials were somewhat nonchalant about safety at chronic care hospitals, analysts say, because they believed that fire prevention issues were handled by the National Emergency Management Agency.

“Issues related to fire, electricity and patient safety are supposed to be comprehensively controlled but it’s not easy,” said one Health Ministry official. “Community Health Center officials dispatched to hospitals for check-ups have no knowledge of safety other than health care. There is a limitation.”

Lax management of workers at the hospitals is also a point in dispute. According to the police, a total of 324 patients were housed in the Hyosarang hospital’s main building and annex.

Statistics in 2012 showed only 44 percent of chronic care hospitals had a doctor on duty on weekends and at night. A doctor is supposed to take care of 31 patients at care hospitals but at some hospitals, 65 were cared for by a single doctor.