Is Soros trying to spark a Japan rally?

Is Soros trying to spark a Japan rally? 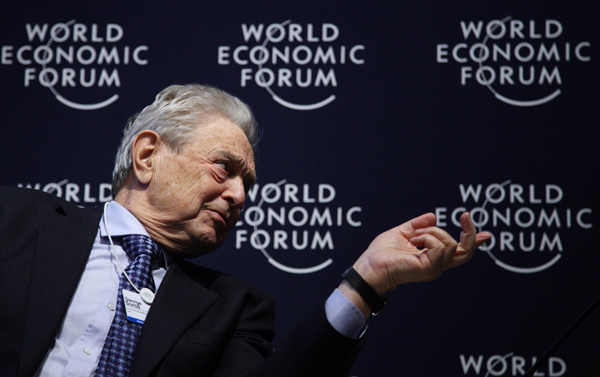 Takahiro Mitani finds himself between George Soros and a hard place.

Mitani is Japan’s $1.26 trillion man. The Government Pension Investment Fund that he runs tops Mexico’s annual output and dwarfs the Middle Eastern sovereign-wealth funds that investors are always cooing about. Prime Minister Shinzo Abe wants the notoriously conservative fund to crank up returns by putting more money in stocks - with an unlikely assist from billionaire Soros.

In January, the world’s most famous short seller chatted with Abe at Davos, urging him to nudge the pension colossus into the 21st century. News of that tete-a-tete is helping Abe to push changes in the fund’s management structure and to encourage it to diversify. At the moment, about 60 percent of the fund’s holdings are wasting away in the lowest-yielding domestic debt - Japan’s - anywhere. Getting the fund to move large chunks of that money into stocks could provide a timely boost to Abe’s reflation efforts.

It could also be dangerous. When Abe talks about upping stock holdings, I fear what he really means is Japanese stocks. There’s great disappointment that last year’s Nikkei rally fizzled. When shares roared higher, Abe could plausibly argue that investors were heeding his call to “buy my Abenomics.” Now, investors are disappointed that none of the structural reforms pledged 18 months ago have been implemented.

You’d think the prime minister would respond with urgent action to bolster confidence and enliven growth: Next week my government will do X, the week after that Y, and next month Z. Instead, he’s focusing on boosting asset prices. The first blow was struck when the Bank of Japan doubled bond purchases in April 2013. The second, it seems, will entail massive share purchases by the government pension fund, which raises more than a few moral-hazard questions.

A 20 percent drop in the yen has already deadened the urgency for Japan Inc. to boost competitiveness and innovation. The Bank of Japan’s newest quantitative-easing program is little more than corporate welfare for executives, who so far haven’t shared the wealth with employees.

Now, the BOJ may be joined by Tokyo’s pension pool, whose largess can help put a floor under the Nikkei. Here’s where Mitani finds himself between Soros’s advice and hard choices in Tokyo: The best way to boost shares is through sustainable growth, driven by genuine household and business confidence, not through a tsunami of public money.

A lasting Nikkei upturn depends on improved corporate governance, increased productivity and greater entrepreneurship, not on having the government intervene in stocks the way it does in currency and bond markets. Abe would have much more success if he got on with reducing red tape and offering tax incentives for startup companies; introducing Shenzhen-like free-enterprise zones; lowering trade barriers now, rather waiting for the U.S.’s Trans-Pacific Partnership; empowering women; increasing immigration; and improving relations with China and South Korea. To me, the rush to reshuffle Japan’s pension pool suggests Abe is still grabbing the low-hanging fruit, not making the hard decisions.

There’s another reason to worry about diversifying now: timing. As recently as March, Soros was warning about a Japan-like malaise in Europe that might last for 25 years and reverberate around the globe. Such an outcome would clearly be deflationary, no less than a Chinese slowdown would be. Soros isn’t an altruist when it comes to Japan’s pension holdings, but an interested party - and a short seller by trade - looking to profit. If global deflation, or something approaching it, is the ultimate endgame, Japan might want to avoid increased equity stakes for now.

So is this financial socialism 2.0? Higher returns are certainly welcome. Since its debut in 2001, the government fund has returned an average of 2 percent annually. That might be fine, if Japan didn’t have the world’s fastest-aging population and a negligible birthrate. With ever fewer workers paying into the pool and withdrawals exploding, higher returns are indeed needed over time.

Hence the Liberal Democratic Party’s desire to shake things up. That means breaking its ties with the Ministry of Health, Labor and Welfare, where risk-adverse bureaucrats limit the fund’s budget for staff and market data, as well as its autonomy. But this will take time. The fund’s nearly 80-strong staff doesn’t have the infrastructure to morph from a safekeeping fund to the kind of investment entity Tokyo envisions. That would entail adding new layers of risk managers, portfolio experts, strategists and analysts who travel the globe looking for insights and opportunities. This transition will take time - years, perhaps.

Reshuffling Japan’s pension apparatus has its merits. But if this is just a quickie way to boost stocks at the expense of economic upgrades, Abenomics isn’t a buy after all.