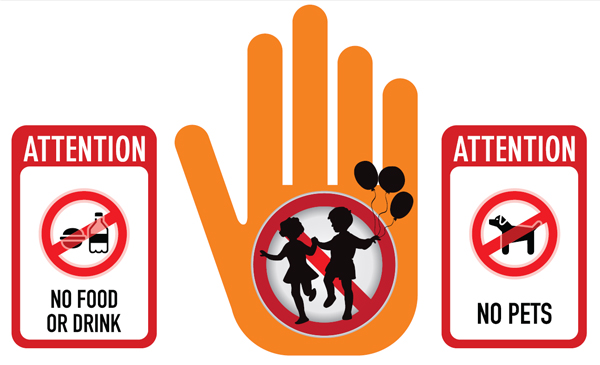 A spacious, white cafe with high ceilings, wooden furniture and a terrace stands out in the neighborhood of Bokjeong-dong, Seongnam, Gyeonggi, not only because of its simple, minimal exterior, but because of a large sign that stands at its entrance.

The message on the sign reads: “For the comfortable ambience of this cafe, we restrict the entry of children. [Infants who can’t walk are excluded.] Customers have a hard time putting up with noise from children. Please excuse us for setting up this policy. College students study here.”

The sign, which was placed outside last summer, instantly enraged mothers living in the northern part of Seongnam, some of whom boycotted the cafe.

The mothers, mostly in their 30s, are angry because they feel that the owner of the cafe is equating their children with pets and outside food, which are banned from almost all coffee houses in Korea.

Upscale restaurants, theaters and opera houses have long been adopting a “no child” policy, but these days, more casual spots such as cafes, burger joints and spas are jumping on the bandwagon.

From a marketing point of view, this is unusual, as parents in their 30s and 40s are the targets of many businesses. These consumers are the most economically active population, because stressed-out parents are usually ready to splurge.

This marketing theory is dubbed “eight pockets,” as a single child is said to open the wallets of at least eight people, including his or her parents, grandparents, aunts and uncles, particularly on special occasions like birthdays, Christmas Day and Children’s Day.

Some barbecue restaurants, which do not generally focus on decor, install play zones to attract customers with young kids. Even five-star hotels adapt their facilities to target parents and children.

“[Families] are important guests for us,” said an official from Lotte Hotel Jeju, who did not want to be fully identified. “The reason we changed the front yard of the hotel from a garden to a heated swimming pool [last year] was partially because of customers with kids.”

So if families are big spenders, why are some businesses refusing to cater to them? And what is the significance of the growing number of antichild places in Korea? Industry insiders say this gives a clear picture of today’s parents.

The approximately 100 mothers who boycotted My Coffee in Bokjeong-dong assumed that the owner is a single, young man who doesn’t like children. Kim Chi-ho, the owner of the controversial business, however, is in his early 50s and wanted to tell his side of the story.

“I’ve been running this cafe without the ‘no kids’ policy for three years since opening,” Kim told the Korea JoongAng Daily by phone.

“Since I run a coffee company of my own, I don’t usually spend time at the cafe, but I saw that employees were extremely stressed out because of wild children, and I also came across them quite often whenever I dropped by the cafe.”

According to Kim, children kept climbing up and down the stairs and messed around with stacked and organized products while mothers chatted over coffee. They even caused some of his other customers to leave.

“We asked mothers to quiet their children, but they just told their kids to behave themselves, and that was it,” said Kim.

Eventually, the policy was unavoidable for Kim. “I’m entitled to provide a comfortable and quiet setting for customers as the owner of the cafe,” he said. “Sales dropped for a while, but I made up for the loss because this place is now known as a quiet cafe.”

The French restaurant July, located in Bangbae-dong, southern Seoul, closes its door to diners accompanied by children during weekdays.

“I didn’t have such a rule when I first opened the restaurant,” said chef Oh Se-deuk, who’s been running the restaurant since 2007.

“After seeing children crawling under the tables of other diners, I decided not to accept guests with children during weekdays because my main customers are businesspeople,” he said.

Ohjisang, a Japanese-style burger house, in Itaewon, central Seoul, is another place that bans kids. The casual eatery is far from fancy, yet the restaurant doesn’t allow children. Its primary reason is because it is a small space that accommodates only a few diners at a time.

From left: A sign outside a cafe in Bokjeong-dong, Seongnam, Gyeonggi, last summer enraged mothers in the neighborhood because the cafe has decided not to accept visitors with children. [Screen capture] July, a French restaurant, located in Bangbae-dong, southern Seoul, closes its doors to diners with children during weekdays. More and more casual places adopt a “no kids” policy, which is an unusual way of marketing themselves because young parents in their 30s and 40s are the most economically active population. [JoongAng Ilbo] Many places, from humble barbecue restaurants to five-star hotels, still try to attract visitors with children by adding more kid-friendly facilities. One example is a Hello Kitty room at Lotte Hotel Jeju, which is themed with Hello Kitty characters. [JoongAng Ilbo]

But workers in the service industry assume the real reason is different.

“I love kids, but I get nervous when mothers come in with kids,” said Ahn Ji-eun, a 23-year-old part-timer at a donut franchise in Gaebong-dong, southwestern Seoul. “Some kids just open the showcase and touch donuts they like. You know they are out of control. But we can’t ask mothers to stop their kids because they get mad at us.”

Ahn also said that some mothers are worse than their children. “They change diapers, laying their kids on the sofa bench in the middle of the donut place where people drink coffee and eat.”

This gigantic, state-of-art spa was featured on CNN.com as “a spa like no other,” and many find its popularity comes from the company’s no-kids policy.

“The age limit was 13 when we first opened years ago,” said Park Gyun-deuk, who promotes the Shinsegae Group spa.

Since July last year, the age limit was lowered to 7 due to multiple requests from parents, but Park said the spa is still quiet, unlike others in which you can hear shrieking children at all times.

No longer the country of manners?

Korea once took pride in being dongbangyeuijiguk, meaning the eastern country of manners, but parents who let their kids frolic regardless of the setting and occasion are increasingly becoming nuisances for many businesses.

Han Yu-mi, a professor of early childhood education at Hoseo University, explained, “To me, it seems like parents who grew up in a society with traditional values choose the opposite, contrary to the past.”

Traditional values state that children should be obedient to elders and mind their manners and language. But these values don’t suit many parents today.

“Boosting the morale of children seems like the foremost task for many parents,” added Han. “Much [of the discipline] is focused on winning competitions at schools, and parents tend to think they shouldn’t stop their children from doing the things they want.

“It sounds great to say you are boosting the spirit of your children, but it is quite self-centered to say so. It means that the most important thing for you is your child and how he or she feels,” said Han.

The most well-known anecdote about self-concerned parents dates back to February 2012. The incident, called the “gungmul-nyeo” case, went viral online. Gungmul means “soup,” and gungmul-nyeo is roughly translated to “soup lady.”

It started with a web post written by a mother of two. She claimed that a female customer burned her 9-year-old son with soup at a food court. She said that the 50-something woman left the scene without taking responsibility.

The woman was labeled gungmul-nyeo. Internet users criticized her harshly for harming the child, but it didn’t take long for public opinion to turn sour toward the mother and the boy.

The day after the incident, the woman in question showed up at a police station and explained it was the boy’s fault.

And the woman was telling the truth. CCTV footage revealed that she was refilling her bowl when the boy ran in her direction, crashing into her. But his parents refused to admit any fault. Instead, they said they would sue the woman.

Lawyer Choi Tae-hyung, who has handled similar cases in the past, appeared on a TV Chosun show called “Law versus Law” and said, “The largest fine is [usually] imposed on the owner of restaurants [involved in these cases].

“The owner is responsible for offering a safe environment for all of his customers,” he continued. “So he also has a right to drive customers out of the restaurant if the customers keep making trouble.”

But Choi said parents can also be held responsible. He referred to an incident in which a girl collided with an employee who was carrying a bowl of hot water.

“The parent had to pay 41 million won to the owner of the restaurant,” said Choi.

Not all parents and children behave inappropriately in public spaces, but Kim from My Coffee says mothers need to think about why businesses are increasingly hostile to kids.

“The mothers and children have no public etiquette at all. Do you think they would only bother people at my cafe? They would do the same thing wherever they go,” said Kim. “I wouldn’t give up the policy even if sales didn’t recover.”