After 59 weeks, Park bumped from world No. 1

After 59 weeks, Park bumped from world No. 1 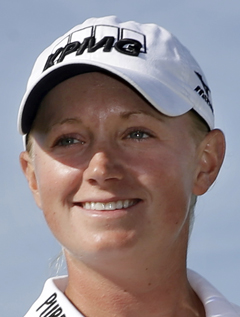 Park In-bee has lost the top spot in the world ranking for the first time in 59 weeks.

Stacy Lewis has won the ShopRite LPGA Classic on Sunday to take the world No. 1 spot from Park, finishing with a 4-under 67 for a six-stroke victory.

“It feels great,” Lewis said. “I feel like I’ve played a lot of good, consistent golf over the last year and I felt like I deserve to be here. I didn’t feel like I stumbled into it.”

Lewis finished at 16-under 197 on the Bay Course at Stockton Seaview Hotel and Golf Club and earned $225,000 for her second victory of the year and 10th overall. Also the 2012 winner at Seaview, she won the North Texas LPGA Shootout last month after finishing second six times in her previous 16 events since winning the Women’s British Open in August.

Christina Kim was second after a 72, marking her best finish since 2010.

Park closed with a 70 to tie for eighth at 7 under. She’s winless in 10 tour starts this season after sweeping the first three majors last year and finishing the season with six victories.

“It is a little bit of a relief not to have the big heavy crown on my head,” Park said. “It’s not the end of the world.”

Lewis finished a stroke off the tournament scoring record set by Sorenstam in 1998 and 2005. The 29-year-old Texan opened with a 67 and had a 63 on Saturday to take a one-stroke lead over Kim into the final round.

On Sunday, she was hardly threatened, using birdies on the third and fourth holes to open up a two-stroke lead before picking up two more consecutive birdies to open the back nine - holing a 25-foot putt on No. 10 and a 15-footer on No. 11.

Despite her first bogey in 42 holes at No. 12 and then missing two short putts on No. 17 for another bogey, Lewis had built up enough of a cushion to cruise home with the largest margin of victory in the tournament’s 26-year history.