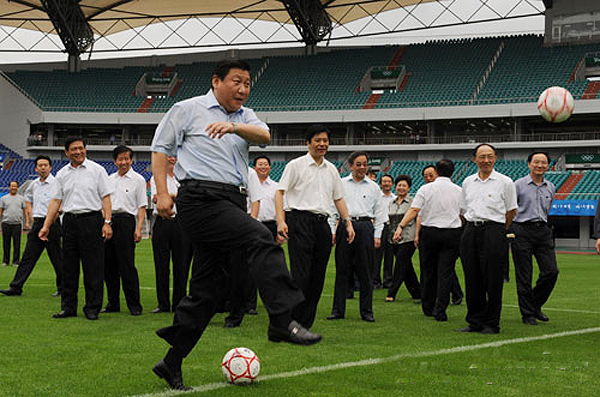 Table tennis is China’s national sport. The chance of a Chinese player, male or female, winning the World Table Tennis Championships is more than 90 percent. The Chinese say their Ping-Pong players are the best in the universe; they are proud that no other country is a match for China. We don’t need to discuss so-called Ping-Pong diplomacy to know that the sport is China’s pride.

But lately, table tennis is not so popular in China. It has been replaced by football, which Chinese President Xi Jinping loves. The leader kicked off a soccer match during a state visit to Ireland, and, when he met with Dutch football legend Edwin van de Sar, he asked him about his techniques. In “Dream of China,” his political ideology, he has included hosting and winning the World Cup.

So why is Xi so obsessed with football? The reason is because football is a part of his strategy to overcome the United States. While table tennis is a charming sport, it does not suit the image of a great power, a member of the G-2. Chinese sports critic Yang Hua said that football should be named the official national sport of China.

It is hard to find the dynamic energy of tens of thousands of cheering football fans in table tennis.

Some Hong Kong media outlets have argued that President Xi should be made the honorary chairman of the National Football Association to develop the sport.

The fact that football leads to the biggest sport economy is another reason for Xi’s love of the game. With more than 30 professional teams, China’s football league is already a bigger market than Korea’s. The total sum of the salaries of all football managers in the Korean football league is less than Guangzhou Evergrande Manager Marcello Lippi’s 13 billion won ($12.69 million) annual wage. China is making a long-term investment to make the Chinese league bigger than its European counterparts.

The Brazil World Cup is fast approaching. While it is not finalized, Xi is likely to visit Korea during the World Cup, and he is sure to make diplomatic remarks by mentioning the World Cup and the Korean team.

As Korea obsesses over advancing into the round of 16 and the quarterfinals, Xi will smoothly address pending issues between the two countries by using the football card that the United States cannot afford to use.

China is not playing in the World Cup, but President Xi has accepted the invitation of Brazilian President Dilma Rousseff and will attend the World Cup final match. His attendance is a part of Xi’s global strategy.