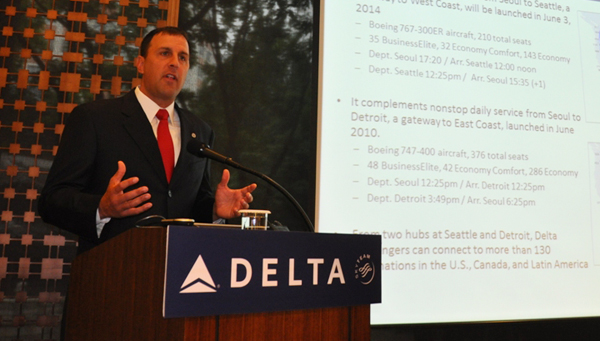 Jeffery Bernier of Delta talks about the launch of a second nonstop to Seattle yesterday at the Westin Chosun Hotel, central Seoul. Provided by the company

Delta Air Lines today launches its second daily direct flight to Seattle, following the launch of the Detroit-Incheon route in 2010, to meet increasing demand for travel to the West Coast of the United States.

“Korea is one of the largest markets in Asia for travel to the United States,” said Jeffery Bernier, managing director of Delta Air Lines Asia-Pacific, at a press conference yesterday at the Westin Chosun Hotel, central Seoul. “We had great service and access to the East Coast, but we didn’t have access from the West Coast. So we decided to complement our West Coast service with the new nonstop to Seattle.”

He added that the launch was part of Delta’s strategy to make Seattle a gateway to Asia.

The airline also has direct flights from Seattle to Narita and Haneda airports in Tokyo, and Beijing and Shanghai in China.

It plans to launch a second Seattle-Hong Kong nonstop flight in two weeks.

Bernier said strong performance of the Detroit-Incheon route partially contributed to the launch of the new Seattle route.

Since demand for business trips between Detroit and cities on the East Coast keeps growing, Delta said that its flights are typically 85 percent booked four days a week.

In response, the American carrier decided to upgrade the aircraft on the Detroit route from the Boeing 777 to 747, which provides additional capacity of about 100 passengers on each flight.

Regarding questions about possible competition with Korean Air in operating the daily route to Seattle, Bernier said Delta views the Korean carrier as a partner.

Delta and KAL are members of the 20-airline SkyTeam global alliance.

“We view Korean Air as a partner as opposed to competition,” Bernier said. “As Korean Air has many connections [flight] in the Incheon hub [airport], I view our partnership will continue to get stronger.”