Korea’s 386 generation is powerful but conflicted

Korea’s 386 generation is powerful but conflicted 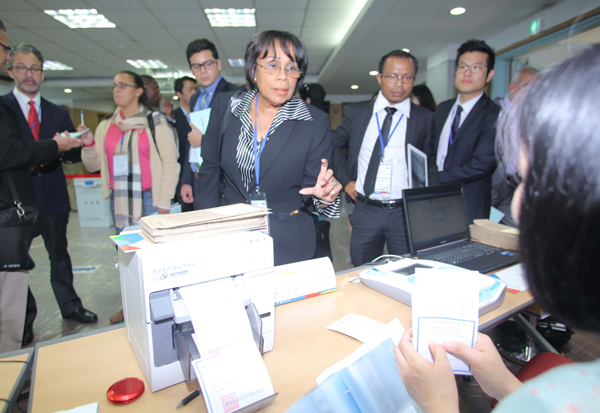 Observers from foreign countries look around a polling station at Nonhyeon 2-dong Community Center in Incheon on May 31. About 120 election officials from 45 countries will visit Korea to observe the election process through June 5. Provided by the National Election Commission

Mrs. Kim, a 50-year-old housewife in Seoul, has never considered herself a conservative. She entered college in 1985, but she never actively participated in the pro-democracy movement against dictator Chun Doo Hwan’s regime. However, she certainly shared the zeitgeist of those days.

But when it comes to voting in tomorrow’s local election, she doesn’t know which way to turn: conservative or liberal.

“I cannot just turn a blind eye to the failings of the last few administrations that have been revealed by the Sewol ferry disaster,” says Kim. “That doesn’t mean the main opposition is the obvious alternative because it also failed to say or do anything to assure the people they are any better. I think I will remain at a loss until the point of arriving at the polling place.”

In the 2012 presidential elections, Kim voted for President Park Geun-hye because she was disappointed with both the opposition and the departing Lee Myung-bak administration.

“Political ideology cannot be the only yardstick for political choice,” she says.

It’s the generation that swings national elections. But it has voted both liberal and conservative - and how it votes tomorrow is up in the air, especially after the Sewol tragedy showed the rotten undercurrent in Korean society, particularly the corrupt nexus among politicians, bureaucrats and business. Collusion between regulators of the shipping industry and operators of the ill-fated ferry is considered a major cause of the tragedy that led to the death of at least 288 people.

Tomorrow they may show that aging isn’t necessarily a one-way march toward conservatism.

Now in their late 40s and early 50s, the generation has become the “Establishment” in terms of social class, but the way they think and behave is complicated.

“People aged between 45 and 55 have higher education levels compared to the generation that came before them and have strong opinions about society,” said Yoon Hee-woong, head of a public opinion analysis center at Min Consulting, a political consulting agency. “But they do not necessarily support the opposition, which has not been able to sell itself as an alternative to hold power. Their disappointment with the opposition led to its defeat at the 2012 presidential election.”

Analysts say they’re also watching the 20-somethings. Voters in their mid- and late 20s were hit by the financial turmoil of the late 1990s when they were kids. The global financial crisis starting in 2008 scared them when they were coming into adulthood. Going against the common perception that the younger generation is usually liberal, the portion of people in their 20s who support the ruling Saenuri Party’s Seoul mayor candidate Chung Mong-joon is higher than the portion among voters in their 30s - 21.1 percent versus 13.4 percent.

That doesn’t mean they are classically conservative, says Hong Hyung-sik, head of Hangil Research, a private poll agency. But they are deemed “realistic.”

“People in their 20s have been involved in competition to survive ever since they were in middle school,” he said. “They tend to opt for modest alternatives rather than political ideology.”