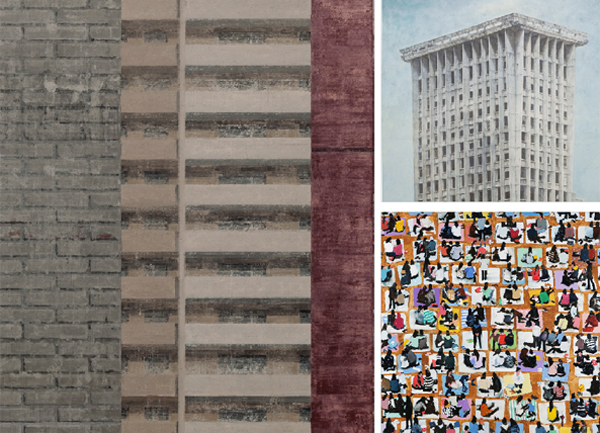 Most Korean artists from the generations that went through extremely rapid urbanization depict city landscapes in negative tones or hesitate to deal with the motif.

On the other hand, artists in the generations who grew up in already urbanized Korea - those in their 30s and 40s - treat city landscapes with more neutral and mixed attitudes, and from various angles.

Many of them are inspired by the concept of a flaneur (“stroller” in French), the idea of an urban explorer reading the spirit of the times and society from the city streets, a concept highlighted by 19th-century French poet Charles Baudelaire and 20th-century German philosopher Walter Benjamin.

Several exhibitions going on now in Seoul feature artists who visualize what they see and make discoveries on city streets as a flaneur or “passionate spectator,” as Baudelaire said. The Korea JoongAng Daily introduces four among them.

In Space BM in Yongsan District, central Seoul, the paintings of Kim Su-young and the painting-like photos of Yum Joongho are hanging. The works capture neglected details of urban landscapes like the surface of an old apartment building or a corner below a big concrete bridge.

On the gallery’s floor are Choi Deajin’s sculptures and installations, including “Untitled,” which resembles an “iron bag” or steel container used in the delivery services of Chinese restaurants in Korea.

Pointing out that the 15 works on display show the images of “objects of extreme banality and concreteness,” Lee Seung-min, director of Space BM, said that “these detailed fragments of a city manage to create an impression.”

The image fragments collected by the artists, who are also flaneurs with the keen eyes of a detective, will help viewers shake off their automatic and conventional recognition of urban reality and get a fresh view of it, Lee added. 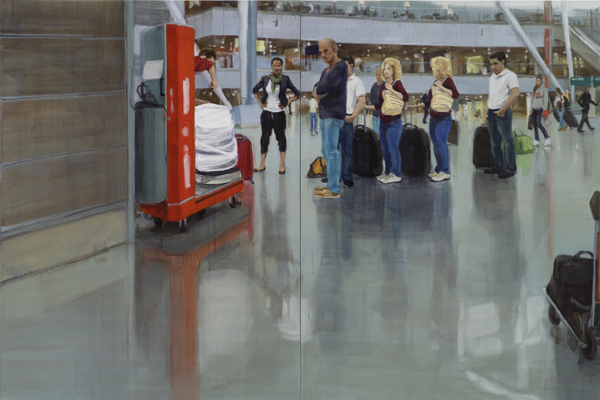 Right, Jina Park’s oil painting “Baggage Sealing 02”(2013) is part of her solo show at Hite Collection. Provided by the artist and One and J. Gallery

In accordance with its title, the solo show of Jung Jae-ho features memories under layers of dust in city scenes showing the age of Korea’s rapid urbanization - the 1960s to 1970s. Though Jung was born in 1971, he depicts objects or scenes that carry memories of his parents’ generation in unique acrylic paintings on hanji, or traditional Korean paper.

The exhibition runs through June 22. Admission is free. The galley is closed on Monday.

The solo show of Jina Park at Hite Collection Gallery in southern Seoul features her latest 20 paintings, which depict normal scenes in airports, such as people waiting in line for baggage sealing or for someone’s arrival.

“The new works of the airport series take the airport as somewhere in particular, in the sense that it does not belong to anywhere between one’s departure and arrival,” the gallery said in a press release. “The exhibition title, ‘Neon Grey Terminal,’ also expresses the particular color tones of airports that the artist came to realize.”