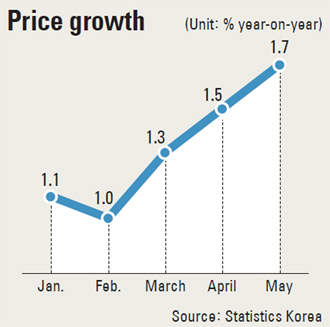 Consumer prices climbed 1.7 percent in May compared to the same month last year, the highest rate of growth in 19 months, the government reported.

According to Statistics Korea yesterday, the nation’s inflation index has increased at least 1 percent every month this year, compared to slower growth in 2013.

The state-run statistics agency said year-on-year growth of consumer prices has stayed above 1 percent this year due to a base effect and product launches ahead of summer.

The May growth rate was the largest since October 2012. However, it was still far below the Bank of Korea’s target inflation rate of 2.5 percent.

Price jumps for manufactured goods led the monthly growth, the agency said, and increases in the cost of services also contributed.

In addition, as regular April sales at major department stores and discount stores ended, prices of manufactured goods went up back to their normal levels.

Prices of textiles rose o.6 percent in May, as they did in the same month last year. However, the growth rate is low compared to the average rate of 1.3 percent from 2009 through 2013.

“Consumer prices are expected to be stable for the time being, but compared to last year, growth should keep increasing based on a base effect,” said the Ministry of Strategy and Finance in a report.

It said agricultural prices are also remaining relatively stable. Another factor that can affect consumer prices is unexpected changes in weather conditions, it added.