Apple shows off its pivot to software

Apple shows off its pivot to software 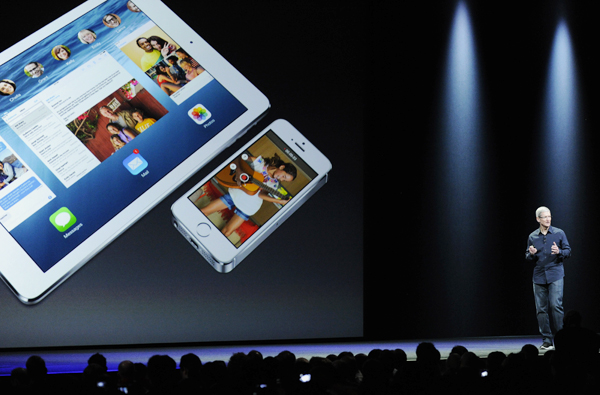 Apple has introduced new health and connected-home features for the software powering the iPhone and iPad, laying the groundwork for a busy second half of the year as the company seeks to rev up growth.

Apple yesterday released new mobile software, called iOS 8, at its annual developer conference in San Francisco. The software includes HealthKit, which lets people monitor their health and acts as a data hub for fitness apps, and HomeKit, which includes home-automation elements so people can control locks, garage doors and lights from their devices. The company also showed products for storing and sending files, and an updated version of its Mac operating system dubbed Yosemite.

As smartphones and tablets with similar shapes and designs proliferate globally, Apple, Google, Samsung Electronics and other technology companies are focused on differentiating their products through software and services that run on the devices. The release of its new tools shows how Apple is increasingly positioning its gadgets to be more of a hub for people’s lives.

“Our operating system, devices and services work together in harmony,” Chief Executive Officer Tim Cook said at the event. “Together they provide an integrated and continuous experience across all of our products.”

The updates offer a glimpse of Apple’s direction since the death of co-founder Steve Jobs in 2011. With iPhone and iPad sales no longer the source of growth they once were, Cook has been under pressure to deliver another hit.

“It was a show for laying the foundation for the next structures that are going to be built,” Horace Dediu, a mobile-industry analyst who runs Asymco, said at the show.

The event follows last week’s announcement that Apple is buying headphone and music-streaming company Beats Electronics LLC for $3 billion, another move to boost growth. The company plans to keep the music and headphones products as a separate brand, a first for Apple, and the deal brings on board music-industry veteran Jimmy Iovine and musical artist Dr. Dre. Iovine was among the attendees at yesterday’s event, which is Apple’s 25th such conference and included programmers as young as 13.

While Apple’s hardware is widely praised for its elegant and simple design, the reception to its suite of services for maps, photo organization and text messaging has been mixed.

Apple said its new mobile software will be available this fall. It includes health-tracking software, which shows the company’s growing interest in wearable technologies. Apple has been developing its own wristwatch-like device and hiring people with experience developing health-related products. Apple said it is working with Nike and Mayo Clinic.

“We think this is going to be really important for health care,” said Apple Senior Vice President Craig Federighi.

The company’s HomeKit will allow developers to create more apps to help consumers use their mobile devices as a sort of remote control for their homes. Apple said it worked with a dozen or so home-automation companies on the underlying technology for HomeKit.

Apple, which has faced criticism from developers who said their apps are hard to find in the company’s crowded App Store, also displayed new search tools, testing features and previews so developers can make short videos to showcase their apps.

The company added ways for apps to work more closely with each other - for example, a photo edited in one app can be quickly added to another one. The programs are currently isolated so data can’t be shared with another tool.

To ease development of apps for the iPhone, iPad and Mac, Apple also introduced an entirely new programming language called Swift, which was greeted enthusiastically by the audience.

Apple’s rivalry with Google was evident. Cook made several digs at Google’s Android mobile software, including criticizing it for having weak security.

Many of yesterday’s announcements also focused on making iPhones, iPads and Macs work more seamlessly together - be it text messages, constructing documents or phone calls. The new Mac software has a feature called Handoff, which simplifies working on documents among Macs, iPhones and iPads. It also includes ways to receive and make calls from the Mac if an iPhone is charging or isn’t available.

To show off the new ways to make a phone call using a Mac, Federighi called Dr. Dre using the computer with updated software.

“I can’t wait to get to work for the team at Apple,” Dr. Dre said during the call. “What time should I get in to work?”

With its new storage and sending products, called ICloud Drive and Maildrop, Apple is set to compete more with Dropbox and similar services.

Using ICloud Drive, Apple will save a person’s files on its servers so they can be accessed from any device. The mail service Maildrop makes it easier to send large files.

“You now have a great way to work across applications,” Federighi said.

Health tracking and connected home technologies are still niches compared with Apple’s iPhone and iPad business. Yet companies including Samsung, Google, Intel Corp. and many start-ups have been pouring money into the technology, betting that the businesses become mainstream. Google agreed to buy digital-thermostat maker Nest Labs Inc. for $3.2 billion this year, while Samsung has introduced new wearable devices that track health and fitness statistics.

Apple executives including Cook and Eddy Cue, the company’s senior vice president in charge of Internet services, have hinted at a batch of new releases coming later in the year and the company’s stock has risen 20 percent since March in anticipation.