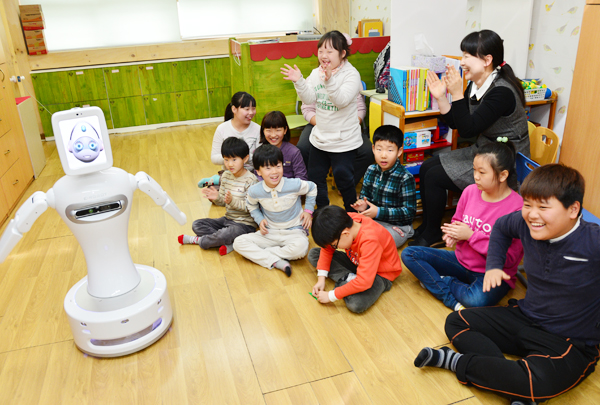 Children practice their English skills with the Silbot-3, a cognitive-ability training robot developed by a robotics start-up established by the Korea Institute of Science and Technology (KIST) called Robocare.Provided by the institute

Robocare, an intelligent robotics start-up established by the Korea Institute of Science and Technology’s (KIST) Center for Intelligent Robotics, plans to sell at least 20 of its intelligence-training robots called Silbot-3 and Mero-S to senior community centers and engineering schools in Korea and overseas.

The company yesterday announced that it has signed contracts with Denmark and India and is working out the details of a contract in Russia.

“The specific size of the sales is difficult to predict as of now since there is no market in this specific kind of robot, but I am confident that demand is on the rise,” said Kim Mun-sang, head of the KIST Center for Intelligent Robotics.

Each robot costs 25 million won ($24,436). Kim said the start-up expects to export 20 units by the year’s end with a profit of about 500 million won. He predicts the company could export up to 500 units by the end of next year.

In Denmark, Aarhus municipal government has signed a deal to purchase three Silbot-3 robots for a mental fitness program at senior community centers in the city.

Aarhus, in conjunction with a Danish company, is looking to establish a joint robot company with Robocare as early as the end of the year to increase the city’s use of Silbot-3 at senior wellness centers.

Robocare has signed a deal to sell 10 Silbot-3 robots to Indian public universities to be used in their robotic engineering curriculum.

The company is waiting to finalize a contract with a Russian company in which Robocare would export about 200 robots to public universities in the country. The Korean start-up will hold a show in Russia in October to display its products.

The Silbot-3 features 17 cognitive-ability training programs for seniors. Of those, 16 are available in English, Finnish and Danish. In the programs, the elderly user follows instructions given by the robot. In some games, the player must memorize and mimic the robot’s movements. Other games strengthen language, judgment and memorization by allowing the user to control the robot.

Once the contracts are finalized, Robocare said it will develop new versions for Russian and Hindi speakers.

Besides cognitive ability games, the Silbot-3 also teaches English. It acts like a teacher through software that allows it to recognize students’ words and facial expressions. Due to 3-D object-recognition sensors and ultrasound sensors that measure distance, the robot knows when obstacles or people approach it.

The Mero-S also has cognitive-training games, but it is geared toward entertaining. It can converse with people because Robocare has equipped the robot with information on topics such as health and weather.

Kim from KIST said he hopes that exporting Silbot-3 and Mero-S will be a good jumping-off point for the Korean robot industry to develop and expand abroad.

“To take the lead in the robot app market, an area in which global IT giants like Google, Microsoft and Apple recently showed interest, Korea needs to take a more aggressive approach to creating locally developed hardware and software, and should explore more business in software content,” he said.

According to the latest data compiled by the Korea Institute for Robot Industry Advancement, Korea exported personal service robots worth 115 billion won in 2012.

The latest robots will be unveiled on June 19 at the Korea Robotics Society’s annual conference.