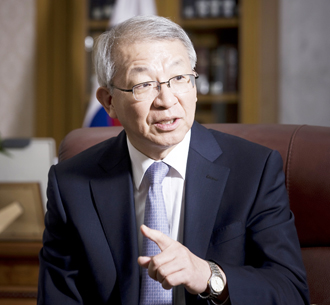 Rulings by judges have recently come under criticism after a former chairman convicted of tax evasion and embezzlement was ordered to work off a 25.4 billion won ($24 million) fine by laboring in prison for just 49 days, and two stepmothers who beat their stepdaughters to death were not charged with murder but with inflicting fatal injuries.

Amid the deepening polarization between legal rulings and social opinion on those cases, the JoongAng Ilbo interviewed Yang Sung-tae, chief justice of the Supreme Court.

Q. How do you feel about the Sewol ferry accident?

A. I am indescribably frustrated. And I’m also disappointed that the accident is shedding light on the backwards aspects of our society. We should prevent such a tragic accident from happening again.

What do you think about it from a legal point of view?

If the case is a matter of the fundamental regulations of society, we should stay as strict as possible. This accident does not just involve individuals but is more about overall regulations in society. We need to look into the case by supposing that we are protecting society from threats and discuss the matter regarding how legal authorities should get involved.

How do you define law and trials?

Law is an agreement among people on how they want society to be, and the society they want can be obtained only when they keep this promise. Trials are peaceful ways of settling conflicts. People should accept the results. If they persist in arguing, peace cannot be maintained.

What do you think of the ruling involving the former chairman who was allowed to work off 500 million won a day?

I heard that local people strongly asked the courts to plead for forgiveness. The prosecution also requested probation. The judge panel did not acquit him but gave a monetary penalty, but the problem was that he could pay it off in about 50 days, which means he could work off about 500 million won a day. The public was outraged about it, and I totally understand why.

Why do you think the court gave such a ruling?

A trial does not come to an end by just settling a conflict. [Judges] must give a righteous ruling by considering the impact on other cases, judicial order and the regulations of our society. I feel shame that the ruling damaged the fairness of the law.

People seem to distrust the courts.

There will be reasons for this both inside and outside of courts. In this rapidly changing world, the people’s opinion on the law is changing faster than that of judges. I think the public is expressing its disappointment at the gap in criminal trials. The rapid changes to legal application are problematic, but unilateral points of view from judges should change, too.

People learn about these cases through the media. There are some aspects that are not exposed to the media, and some are broadcast but are not submitted to the court. Therefore, it feels a lot different from what people would expect when hearing [about these cases] in court. That is also why judges agonize so much. And jury panels actually give lighter punishments than judges in most cases.

Do you think judges are doing their best in deciding punishments?

Judges’ sense of examining offenses needs to change with shifts in society, but they tend to be a little bit slow. It is also a problem when they change too fast because it threatens legal stability. But judges need to have a serious talk about whether they should follow only traditional standards. In the past, there were many people committing crimes for survival, but now the income level has increased and our values have shifted. We cannot stay the same. The ultimate mission of the judiciary is to maintain social stability and peace by applying the law properly.

People sometimes suspect that decisions made by judges are affected by personal connections, money or the authorities.

Courts are never swayed by those matters. I can assure you of that. People sometimes think chief justices of the Supreme Court or other courts give guidelines for major trials, but that is not true. Even if we tried to give such orders, other judges wouldn’t accept them. That is why I emphasized communication [between legal authorities and the public] and said we will show everything to the public after I took office.

Why is communication important for the courts?

The time when judges only spoke through sentencing has passed. Mistrust often originates from a lack of understanding. [Judges] do not just sit and wait, but they should take steps first to make the public trust them.

What kind of endeavors are needed from judges?

When judges are preoccupied with cases, they cannot think about other aspects. If anything, they might resist what others say because of the confidence that they are working well. It is important for the judicial branch to build a social consensus with the public, but communication within the branch is more important.

What do you think of controversies over decisions on political cases?

In many cases, people criticize us for giving less favorable decisions, even when based on legal principles. We need to accept reasonable criticism, but it gets problematic when it becomes a political issue between parties.

What do you think judges should fundamentally remember?

They should look back on things that they have missed while busy. They should desperately feel that our rights come from public trust.

What do you think of critics who say that legal logic and the public’s feelings on the law are polarized?

We should respect the mainstream feelings of the public, but we also should not be tempted by temporary public opinion. It is hard to distinguish between the two. Globally, the independence of jurisdiction from public opinion is pursued.

Some are saying that judicial branches are becoming more conservative.

If they mean that we settle for the present and do not pursue change, it is hard to understand. When I said “communication” at inauguration, it was not a general topic at that time. I think we should be more proactive and break the mold. They may be saying that there is no adequate person after a progressive Supreme Court judge retires. But even now, we also often have conflicts between conservative and progressive views when we are making unanimous decisions.

What is the most urgent change needed for the judicial branch?

People believe in the stereotype that there are three trials. And many think they should appeal until they win. But given the example of other advanced countries, we should have trials once in principle, with appealing being accepted only when there is a big mistake in the first trial. I want to strengthen the first trial and renovate the appeals system.