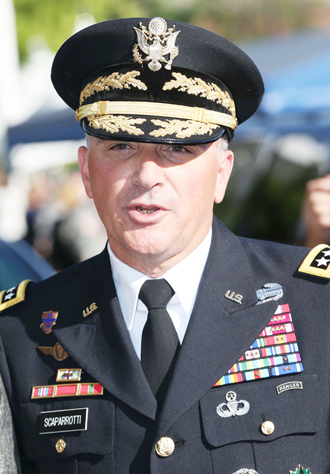 “I recommended the deployment of the Thaad [Terminal High Altitude Area Defense] missiles to South Korea,” said Gen. Curtis Scaparrotti, commander of South Korea-U.S. Combined Forces Command, at a lecture at a forum hosted by the state-run Korea Institute for Defense Analyses at the Westin Chosun Hotel in central Seoul yesterday.

Scaparrotti emphasized the need to successfully bolster South Korea’s defenses and said that with “North Korea’s evolving threats, this system [Thaad] will provide a greater sense of security.”

The four-star general said that he encourages cooperation between Seoul and Washington in regard to the deployment of the Thaad antiballistic missile system in Korea. But Scaparrotti pointed out that the United States has not yet made an official request to the South Korean government to deploy the Thaad system.

Seoul’s official position is that it doesn’t want to purchase the Thaad antiballistic missile system or the Standard Missile 3, which both have a broader range and altitude to intercept short- or intermediate-range missiles from the North. That would upset both China and liberal-leaning locals who want moderate independence from the U.S. defense system.

“When there is an official request from the U.S., at that time our Defense Ministry will review it at the government level,” Kim Min-seok, spokesman for the Ministry of National Defense, said yesterday. “However, thus far there has been no request on cooperation yet.”

The U.S. reportedly conducted a site survey in Korea for possible locations for Thaad equipment, according to The Wall Street Journal last week. Scaparrotti said yesterday that the current progress on the issue is not being accurately reflected in the media and is rather in the initial process.

The Korea Air and Missile Defense, launched in 2006, incorporates South Korean missile defense radar with early warning data from U.S. satellites. When a U.S. satellite detects missiles coming from North Korea, it signals a missile interceptor system here called the Patriot Advanced Capability-2 (PAC-2) and other ship-based interceptors to shoot down the enemy missiles. The Korean military plans to upgrade the PAC-2 missiles to PAC-3s. For Seoul, accepting deployment of the Thaad system may endanger relations with China and Russia.

The Chinese government has also expressed disapproval of Korea considering the Thaad system, saying it will threaten regional security.