2 fishermen defect but one chooses to go home

2 fishermen defect but one chooses to go home 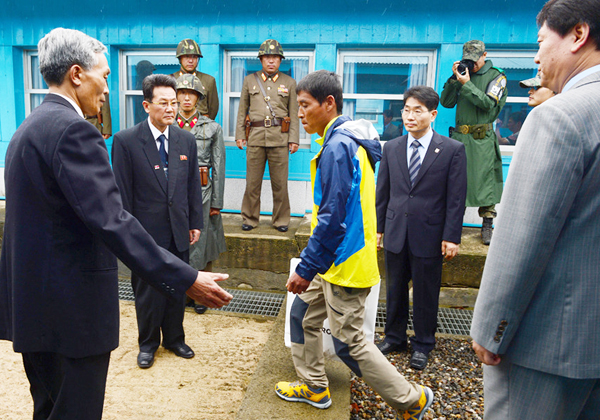 One of three North Korean fishermen who drifted into South Korean waters is repatriated yesterday in Panmunjom. After the other two expressed their wishes to remain in the South, the South Korean government accepted their requests on humanitarian grounds. [NEWS1]

South Korea repatriated one of three North Korean fishermen who drifted into its waters, but the other two were allowed to stay in the capitalist South as they requested.

The South’s Ministry of Unification, which is in charge of dealing with North Korean defectors, said yesterday one of the three North Korean fishermen rescued by the South Korean Coast Guard on Saturday was returned to the North through the heavily armed border village of Panmunjom upon his request.

South Korea accepted the request to remain in South Korea from the other two, the ministry said, on humanitarian grounds.

“At around 11:15 a.m. North Korea received the fisherman sent back from the South,” a Unification Ministry official told reporters at a briefing yesterday. “North Korea did not express any particular response [to the two fishermen who defected].”

The three fishermen were found on a 1.2-ton wooden boat drifting near Ulleung Island, one of South Korea’s far eastern islands, at around 2:15 p.m. on Saturday, according to the Unification Ministry.

Some South Korean fishermen on a nearby vessel reported them to the Coast Guard, the ministry said.

The three men were the only crew on board, according to the ministry. Two of the men were in their 30s and one was in his 20s.

They told South Korean investigators that they departed from a port in Chongjin, a northeastern region in North Korea, on May 28.

When they were found, they had some food, water and fishing equipment, the Coast Guard said.

During questioning, one of the two older men asked South Korean officials to return him to his homeland.

On Monday, North Korea sent a fax to South Korea demanding the repatriation of the fishing boat and the three men immediately, the ministry said.

Ministry officials said they decided to discard the broken ship as specialists said it was impossible to fix. Again yesterday, North Korea reportedly called for the return of the other two fishermen in a daily telephone conversation with South Korean officials at the village of Panmunjom.

The two will enter the Hanawon resettlement center as soon as they finish mandatory questioning by the National Intelligence Service, the Unification Ministry said.