To acclimatize, team sweats on pitch and in hotel

To acclimatize, team sweats on pitch and in hotel 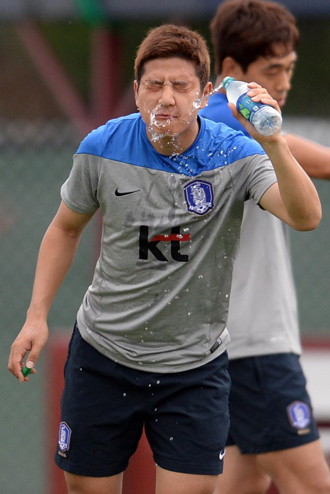 The first priority for Hong Myung-bo, the coach for the national football team, is a victory against Russia on June 18.

A day after arriving in Miami on Saturday to begin final training for the 2014 Brazil World Cup, the Taegeuk Warriors worked out at St. Thomas University.

“I will make the team put out its their best effort to win three points against Russia,” said Hong, who has relentlessly emphasized the importance of the first match.

The Korea Football Association chose Miami as the site for the team’s final training because the weather is similar to that of Cuiaba, where the first match will be played. Cuiaba’s average high temperature in June is more than 30 degrees Celsius (86 degrees Fahrenheit) with 70 percent humidity. Hong thinks adapting to Miami’s weather will help his team in Brazil.

And it looks like the 23 players are getting their coach’s message loud and clear, voluntarily turning off the air-conditioning in their hotel rooms.

“We get sweaty in only 10 minutes without air-conditioners, but we just open our windows wide,” said team captain Koo Ja-cheol. “I think this is part of our training, too, because we have only heard about the local weather, but never experienced it.”

The players also tend to wear long sleeves in places where they can’t control the air-conditioning such as the hotel restaurant, and they go for walks of about 30 minutes before and after meals to adapt to the heat.

“Turning off an air-conditioner may be a small thing,” said goalkeeper Jung Sung-ryong. “What’s more important is that we are all doing it voluntarily. We always try to improve the teamwork and such efforts will help us accomplish our goal. I think that such little efforts could mean something big in the event for sure.”

Na Young-moo, who was the national team’s physician until last year, said players are doing exactly what they need to do.

“The temperature difference among the three places where Korea has matches in the first round is like the differences between summer and winter,” he said. “They should not take off their shirts if it’s too hot and wear warm-up jackets if it’s a little chilly because frequent changes in body temperature can be a huge stress to the body.”

On the field, Hong focused on conditioning. He is the type of coach who doesn’t speak loud or yell at players during training, but in Sunday’s session he ran with players on the field, sometimes yelling, “Try to predict where the ball would go next” and “Think about what your teammates can if you pass them the ball. Don’t automatically give it one just because he is in your sight!”

Because the team had a hard time creating scoring opportunities in the friendly match against Tunisia, which it lost 1-0, players spent a lot of time during the training session practicing attack strategies as part of their preparation for Russia, which has a solid defense.

Striker Park Chu-young and 196-centimeter (6-foot-4) Kim Shin-wook were tested on the top of the offense line and midfielders were divided into two groups and worked on making accurate crosses to the strikers.

“We are trying to improve the game tempo and rhythm,” said captain Koo. “And we are getting every day for sure.”