Russia looks to the East

Russia looks to the East 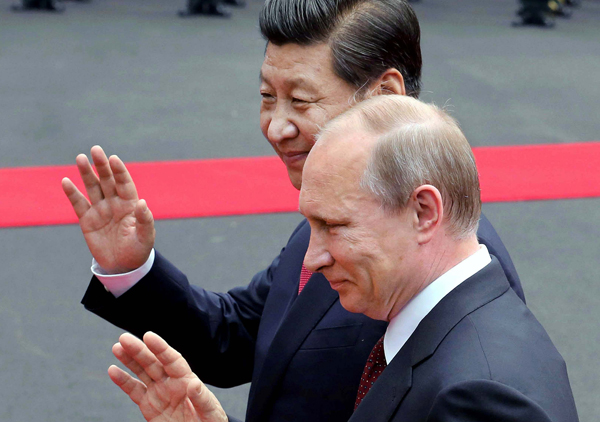 With a stroke of President Vladimir Putin’s pen, Russia has taken a salient, impressive and pivotal step toward Asia. Putin traveled to Shanghai to sign a historic deal to supply $400 billion in natural gas to China over 30 years. Many wondered if the mega deal, which had been discussed for a decade, would ever materialize given differences over pricing. But the breakthrough between one of the world’s biggest energy suppliers and its largest energy consumer was possible because of the determination of the two countries’ leaders. Under the contract between Russia’s Gazprom and China’s Petroleum Corporation, 38 billion cubic meters of Russian gas will be supplied annually via a new pipeline.

Energy has been redefining the bilateral relationship of the two former communist allies. Last year, Russia’s Rosneft signed a contract to double its oil sales to China. Moreover, Moscow made a rare exception for China by allowing an equity investment in liquefied natural gas and oil development projects in East Siberia. China has gained access to Russia’s core energy pipeline from the beginning of the supply chain to final consumption.

This is the “comprehensive” package touted by Igor Sechin, Putin’s closest ally and his former deputy prime minister, and now head of the Russia’s largest oil company, Rosneft. By including its foremost client - China - in the exploration and manufacturing stage, Russia can reduce both its risk and cost as well as share the benefits. Russia plans to apply this marketing formula when it pitches energy sales to other Asian importers.

Some in the Kremlin were not pleased with opening doors for Chinese capital, but for Russia, China was its best practical option to rebuild and upgrade domestic infrastructure. The deal secures a long-term supply line and partnership. For Russia, it has diversified its energy export routes amid stagnant demand in Europe and robust gas production in the United States and secured stable revenue for decades. Moscow now has the resources and leverage to map out budgeting and long-term development. It finally placed itself on stable grounds to envision a national strategy for the future.

Russia plans to boost energy deals and cooperation with other Asian countries, and Japan is widely seen as its next major target. Russia has been envious of Japanese energy companies’ rich capital, technology resources and experience. It wants to partner with Japan for future energy development through its comprehensive formula.

Why does Russia need partners to tap into its rich natural resources? Its ultimate energy aspirations and riches lie deep in the Arctic. More than 60 percent of Arctic oil and gas resources are in areas claimed by the Russian Federation. Russian companies still lack expertise and resources in offshore oil and gas extraction. The ambitious project is too risky and lengthy to be taken up by Russian alone. It is seeking out business partners as kind of a try-out for the main contest. Companies and countries with which it is most comfortable are likely to be picked out to work together with Russia on the lofty energy developments in the Arctic.

South Korea initially had been a potential partner. But recently, Seoul’s interest has waned. Energy partnership with Russia is tempting, but not easy due to major stumbling blocks. For one thing, any deal - gas pipeline or trans-continental railway - must involve North Korea.

Returning from his trip to Shanghai, Putin traveled to eastern Siberia and helped to release two rare orphaned tigers into the wild to celebrate the landmark deal with China. The deal has raised China’s influence over Russia. Putin’s release of the two tigers may carry a meaning beyond ceremonial purpose. Russian authorities said the two tigers will be monitored.

The world also will be closely watching the two Asian giants as they start out on their new path.

*The author is a professor at Hankuk University of Foreign Studies.