What China loses by forgetting

What China loses by forgetting 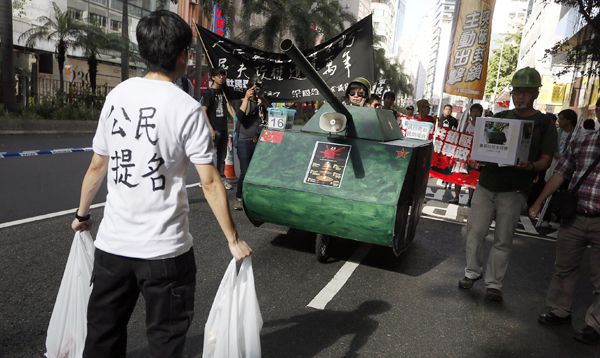 A protester stands in front of a mock tank to symbolize the man blocking a line of tanks at the 1989 pro-democracy movement in Beijing, as thousands of Hong Kong people march on a downtown street in Hong Kong on June 1 to mark the 25th anniversary of China’s bloody crackdown on Tiananmen Square. [AP/NEWSIS]

In the last month, in two separate cities, I was involved in events related to the rewriting of the history of Chinese contemporary art. In Shanghai, two of my works, “Stool” and “Sunflower Seeds,” were included in an exhibition commemorating the 15th year of the Chinese Contemporary Art Award. A half-hour before the show opened, local officials had my name erased from the exhibition’s wall text and barred the artworks from being displayed. A few weeks later in Beijing, under similar pressure, the Ullens Center for Contemporary Art excised my name from publicity information about an upcoming show honoring my late friend Hans van Dijk, with whom I had founded one of the first experimental art spaces in China. I decided to withdraw all my pieces from the exhibition in protest.

In both cases, the works in question were deemed uncontroversial in themselves. The point was to remove any reference to me and my work to keep me out of the public eye in the run-up to the 25th anniversary of the Tiananmen Square massacre in 1989. My lawyer and friend Pu Zhiqiang has suffered worse: He and four others were recently detained for discussing Tiananmen - where he’d been one of the student protesters - in a private gathering.

Pu Zhiqiang is one of the few people in this country who insists on not having his history completely erased. I, too, was censored not for the content of my work, but because I am a person who insists on the facts, who wants an admission of history and who has constantly voiced these concerns on the Internet. These are all sins in China today - especially now, with this anniversary upon us.

Modern China’s forgetfulness did not start or end with Tiananmen. Even before the summer of 1989, dozens of darker, crueler incidents lay hidden in Chinese history. Today’s leaders cannot acknowledge their stated ideology before 1949, the principles that helped the Communists gain power over the Nationalist government: establishing a democratic and law-abiding society, ending the one-party system and having an independent judiciary. In 1989, the students in Tiananmen Square asked for those same things. Since then, they’ve become unmentionable.

During Chairman Mao’s lifetime, he started dozens of political movements, none of which have been re-examined by the party in a forthright way. Huge topics such as the Cultural Revolution and the Great Leap Forward lack any accepted accounting. Because there is no discussion of these events, Chinese still have little understanding of their consequences. Censorship has in effect neutered society, transforming it into a damaged, irrational and purposeless creature.

In the West, there are those who think that a new group of leaders can somehow bring change to China - that “reformers” can eventually outweigh the “hardliners” within the party. Yet while China has progressed in many ways since 1989, the system has not. How can it, when those who run things refuse to analyze or discuss the morality of past decisions? How can a government that alters or even completely erases history, acknowledge its faults and adjust its actions in the future?

We Chinese are not blameless either. While Chinese society has undergone some of the most extreme changes in human history in the last 25 years, in the realm of values, very little has changed. Most of us are first and foremost concerned with our day-to-day needs and ambitions - jobs, education, apartments - and won’t exert much effort or sacrifice to achieve anything beyond that.

China has chosen to forget, or to allow forgetting - an attitude the West will find hard to understand. This provides China a way to liberate itself from heavy self-criticism, as well as a heavier moral burden. More important, it frees Chinese from responsibility for their actions and acquiescence.

If China has pulled off an economic miracle since 1989, this self-imposed amnesia is also a sort of Chinese miracle. The mind-set will not change until Chinese themselves understand that the lack of accurate information about their own past injures their well-being just as much as the polluted air or corruption.

How long can China continue on this forgetful path? With the Internet and globalization exposing citizens to truths that are self-evident elsewhere in the world, the country is facing an internal crisis of credibility. The loss of trust and moral common ground between individuals and the state is the most dangerous issue facing the regime today. China cannot move forward unless it first confronts this problem - rather than suppressing it like so much else in our history.

*The author is a Beijing-based artist and sociocultural critic.