Financial group system at a crossroads

Financial group system at a crossroads 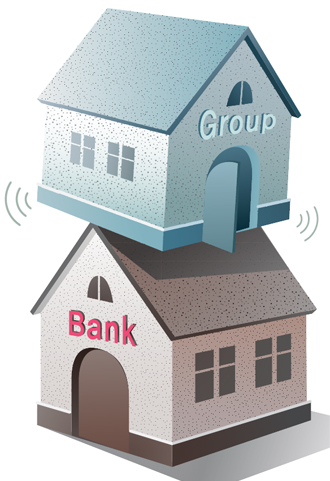 Fourteeh Effectiveness of the financial holding group system is called into question 14 years after it was introduced due to the latest internal conflict at KB Financial Group over a minor issue of changing its bank’s network operating system.

The government adopted the system that puts a bank, securities firm, credit card company and life insurance business into one group in order to enhance the financial industry’s competitiveness by creating synergy between the businesses, but for the past years, there have been a number of conflicts between chairmen and CEOs within financial groups, which rather hindered the industry’s growth.

In recognition of problems, the Financial Services Commission is going to announce a plan to deal with the matter in a way to supplement the current system this month.

Experts point out the financial holding group system itself has many advantages, but it is true that the system has not worked efficiently in Korea due to regulations, a conservative culture in the financial industry and the government’s intervention in appointment of group leaders.

Some call for even ditching the system and adopting the European style of universal baking that allows banks to run securities and insurance businesses.

Hyun Oh-seok, deputy prime minister and finance minister, said the government is planning to remove regulations that partition businesses in the financial, health and medical, tourism, software and education industries as part of the government’s deregulation initiative at an annual meeting of the Inter-American Development Bank in Brazil in March.

The government introduced the financial holding company system as law in 2000 in order to increase the competitiveness of the industry after the Asian financial crisis of the late 1990s. Having banks, insurance, securities and credit card businesses under one group was supposed to lead to synergy. The government cited the case of the JPMorgan Group and Citi Group in the United States.

Woori Financial Group that is currently undergoing privatization was launched in 2001 as the first financial group in the country. The government created the group by integrating five struggling banks. 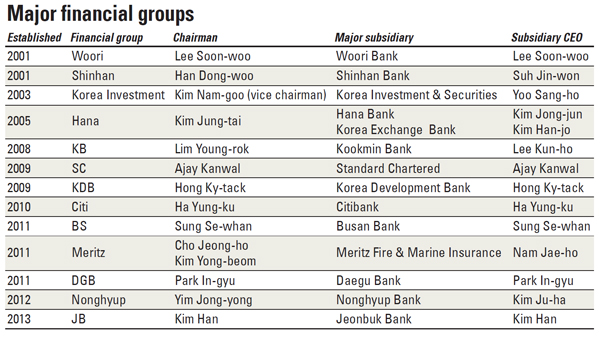 The government’s involvement in appointments of the financial group chairmen is a main culprit of internal strife at the groups.

In 2008, Kookmin Bank re-launched as KB Financial Group, and it has become a hotbed for internal power struggles every time the top management changes. For the past five years, all chairmen of the group have come from outside the bank.

Former Chairman Euh Yoon-dae, a close ally of former President Lee Myung-bak, was the prime example of a so-called parachute appointment by the government. Euh, former dean of Korea University, has never been in the financial industry. He ended up having severe conflicts with the group’s board over attempts to acquire ING Life Insurance.

Incumbent Chairman Lim Young-rok, who served at the Finance Ministry until 2008, is believed to have connections to the Park Geun-hye administration. Kookmin Bank CEO Lee Kun-ho served at the Korea Institute of Finance before being nominated.

Cacophony between Lim and Lee broke out in late May as the bank’s board and Lim wanted to change the bank’s IT system. Bank CEO Lee and auditor Jung Byung-ki opposed the idea.

The UNIX operating system can supplied by many companies including IBM, Hewlett Packard, Oracle and others.

The problem began last October when the bank failed to agree in negotiations with IBM on pricing.

It decided to switch to UNIX, which is more open and therefore less safe but is also cheaper. In November, it announced a bidding process for the contract.

Then, CEO Lee received a complaint e-mail from IBM Korea on April 14, and ordered Jung to look into it.

The FSS decided to launch an investigation into KB, drawing public attention and tattering the group’s image once again.

An executive at one of the four largest financial groups pointed out that the latest KB case demonstrates that a weak chairman appointed thanks to government influence just leads to trouble within a group.

“To me it seems like the KB chairman does not have control over the bank,” he said.

KB is not the first group that has had such a schism. In 2010, the then-CEO of Shinhan Bank sued the CEO of Shinhan Financial Group for embezzlement and breach of trust “Parachute appointment practices trigger such conflicts between the holding companies and subsidiaries,” said a statement by Solidarity for Economic Reform. “Many of those political appointees hardly complete their three-year term, so they look for short-term achievements .”

Another problem is that there is no distinctive role of the group chairmen, an insider of a group pointed out.

“By artificially creating the financial holding companies, the government has made many unnecessary posts,” the insider said. “The groups’ chairmen and banks’ CEOs’ positions have over-elevated and they get unreasonably high salaries.”

Too much dependence on banks is also pointed out as a cause of internal conflicts at the groups.

Earlier, there were expectations that the financial group system would help cards, insurance and securities companies grow altogether.

However, 14 years after the introduction of the system, the expectations haven’t materialized. The groups depend heavily on their banks. About 80 percent of the total assets of 11 groups that have banks are made of the banks’ assets, according to data by the Financial Supervisory Service.

Kookmin Bank’s proportion to the group assets is as high as 88.6 percent.

Because the banks are big, the CEOs of the banks reportedly do not want to obey the group chairmen.

“The chairmen can be compared to scarecrows,” said an executive at a financial group. “The holding companies don’t really have power compared to the banks, which are larger and make most of the groups’ profits.”

But performances of the bank-based groups turned out to be worse than other banks that are not in a group. 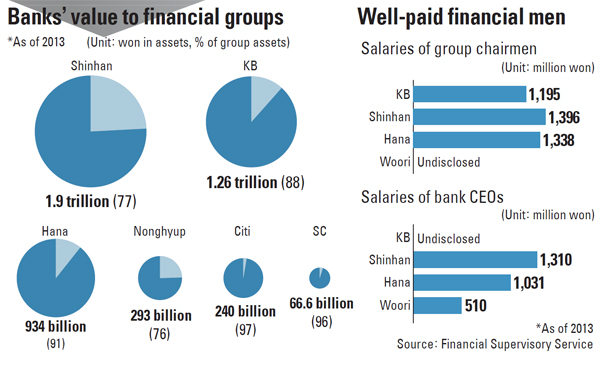 Analysts say that to have the financial group system work properly the partitions that screen off subsidiaries of a group should be removed.

“The system is not needed in an environment where the subsidiaries can’t make synergy,” said Shin Bo-sung, a research fellow at Korea Capital Market Institute. “In Korea, the problem is the banks and securities firms operate on their own.”

“Every creation of a new group costs companies a lot,” the researcher said.

When a holding company is established to oversee a bank and other subsidiaries as a group, shareholders have to indirectly control the units through holding company, and the companies tend to prevent excessive dominance of the shareholders by hiring auditors, he explained.

“This structure not only slows the decision-making process, but also incurs agency costs by hiring auditors,” he said. “The group structure gets more complex, too.”

Shin proposed a matrix structure for Korean financial groups to address such problems.

The matrix structure refers to combining similar businesses among a group’s subsidiaries, or make them open to each other and cooperate.

In a matrix-structured financial group, for example, one

executive takes control of corporate finance function of the bank and that of the securities unit.

Some financial groups in the country once made attempts to establish the structure in the past, but the efforts turned out to be failures, because of the rigid and conservative culture of the Korean financial world.

“The government is now considering removing the limit again,” Shin said. “Close collaboration among units is essential to discovering new sources of profits and cutting costs.”

Usually top management of banks refuse to accept the structure in order to prevent their influence across the group from being undermined, according to the expert.

Yun Chang-hyun, chairman of the Korea Institute of Finance, said the financial industry needs to consider the mixed bank system.

“Korean banks have a tendency of doing all things on their own without collaboration with others,” Yun said. “The Korean financial group system hasn’t yet settled down. There needs to be constant supplementary measures to improve the system in a Korean way.”

He added it will take more time to see the groups produce expected synergy, but said it is true the system has many good points.

“The Korean financial industry’s culture is very conservative and hierarchy is very strong,” the chairman said. “This makes it difficult to expect horizontal cooperation across subsidiaries.”

Experts point out that the existence of the separate laws is not consistent with the group system.

The International Monetary Fund and World Bank said in a recent report that the Korean financial supervisory system and laws make institutions vulnerable to risks.

Securities firms complain that the groups are centered on banks, discouraging the securities industry’s growth.

“The bank-centered group system will never help grow the insurance and securities industries,” said Park Jong-soo, chairman of Korea Financial Investment Association. “It is because of the separate laws.”

Some say the chairmen need to be allowed to hold the CEO jobs concurrently in order to reduce internal conflicts.

KDB Financial Group’s chairmen have been also the CEO of the Korea Development Bank ever since the group’s foundation in 2009.

“In terms of efficiency, it is desirable to let the chairman be the CEO,” said a government official at the financial authority.

Citi Financial Group in Korea plans to ditch the group system in September.

“Since Citibank accounts for about 97 percent of the group, it will be more desirable to simplify the structure,” said a Citibank insider.

Woori Financial Group is also expected to disband the group through the ongoing privatization.