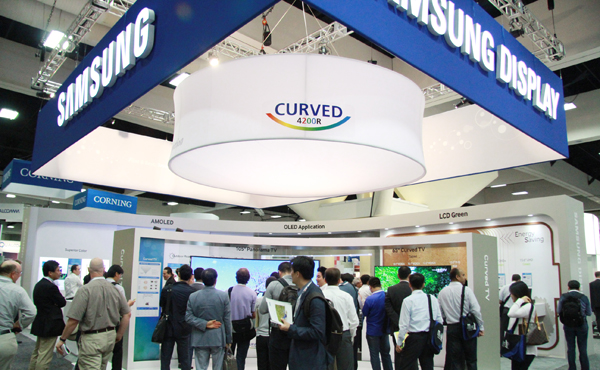 Attendants of the Society for Information Display’s annual conference browse various products and technologies showcased at SID 2014 at the San Diego Convention Center on Tuesday. Samsung Display and LG Display won top awards at the conference for curved displays that they unveiled last year. Provided by Samsung Display

The curved display technologies of Samsung Display and LG Display have been recognized by a prominent global display industry group, the companies said yesterday.

The Society for Information Display, which started its annual conference, SID 2014, at the San Diego Convention Center on Tuesday, gave three of its top awards to the two Korean companies on Wednesday, according to the companies.

The society hands out the Gold Award and Silver Award to the best display products, technologies or components produced in the previous year in three categories: display of the year, display application of the year and display component of the year.

Samsung Display said it received the Gold Award in the Display of the Year category for its 5.68-inch full HD curved Super Amoled, which was used last year in Samsung Electronics’ Galaxy Round, the world’s first curved smartphone.

Held annually since 1995, the SID conference will run through Thursday, U.S. time. More than 5,000 display industry experts are expected to participate in this year’s meeting.