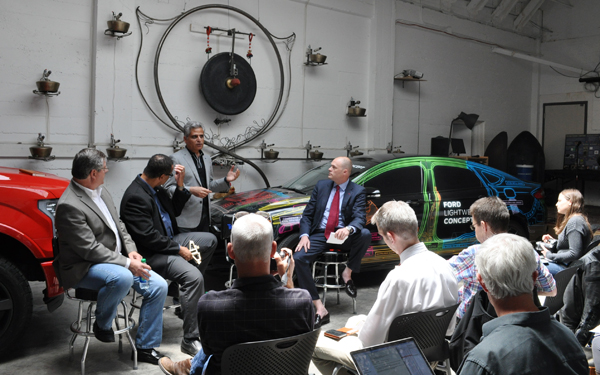 Samsung SDI and the Ford Motor Company announce a plan to jointly develop an ultra-light lithium-ion battery during a Ford media event held in San Francisco on Tuesday. The person on the left is Mike O’Sullivan, vice president of Automotive Battery Systems for Samsung SDI North America. Provided by Samsung SDI

Samsung SDI, the world’s leading developer of lithium-ion batteries, said yesterday it will join forces with Ford Motor Company to develop a more-efficient battery for cars.

The product the companies are zeroing in on is a lithium-ion battery that is at least 40 percent lighter and has better energy efficiency than the standard lead-acid battery for gas-fuelled cars. The lighter battery will be developed with the ambition of filling the roads with electric vehicles, the Korean company said.

“Lithium-ion batteries are typically used in consumer electronics because they are lighter and more energy-dense than other types of batteries, which also makes them ideal for vehicles,” said Mike O’Sullivan, vice president of Automotive Battery Systems for Samsung SDI North America during a Ford media event held in San Francisco on Tuesday. “Battery technology is advancing rapidly and lithium ion could one day completely replace traditional 12-volt lead-acid batteries, providing better fuel efficiency for drivers.”

The move - following a decision by Samsung Everland, the de facto holding company of Samsung Group, to go public - may indicate the growing clout of Samsung’s heir-apparent Jay Y. Lee at the country’s largest conglomerate amid the concern over the health of his father, Lee Kun-hee.

Jay Y. Lee, 45, is known to be interested in the battery business for electric vehicles.

Tuesday’s announcement of Samsung Everland’s initial public offering plan for next year is seen as arming Jay Y. Lee and his two siblings - Boo-jin and Seo-hyun - with a war chest for the costly inheritance procedure.

Lee Kun-hee has been hospitalized since May 10.

The car battery business is one of the five areas Samsung Group chose as new growth engines in 2010. The other four were solar cells, LEDs, medical instruments and bioengineering.

According to B3, a Japanese research agency tracking the market for secondary cells or researchable batteries, Samsung SDI accounted for 25.8 percent of the global small-sized secondary cell market last year. It has led the market for four consecutive years since 2010.

Lithium-ion batteries, a key product for Samsung SDI, have been used in mobile electronic devices such as smartphones. But they are increasingly being used for hybrid cars and are recognized as having much bigger growth potential in the electric vehicle era.

Samsung SDI has signed a contract to supply lithium-ion batteries for automakers such as BMW, Chrysler and Mahindra & Mahindra of India.

For instance, Samsung SDI’s 60Ah battery is powering the BMW i3, which rolled out last year. The BMW i8, which will be released this year, also runs on a Samsung lithium-ion battery.

In January, Samsung SDI signed an MOU with Shaanxi Province and Anqing Ring New Group to build a car battery factory in the Chinese province to bolster its presence in what is expected to be the world’s biggest electric car market. Samsung SDI plans to invest $600 million over five years in the joint project.

It is also conducting research with the U.S. Advanced Battery Consortium, the collaborative body of the three major U.S. automakers, on the development of a next-generation electric car battery.

Meanwhile, Samsung SDI and Ford said they will also work together to develop a dual-battery system combining a lithium-ion battery with a 12-volt lead-acid battery. The dual system could provide fuel savings by enabling regenerative braking in non-hybrid and non-electric vehicles for the first time, they said.