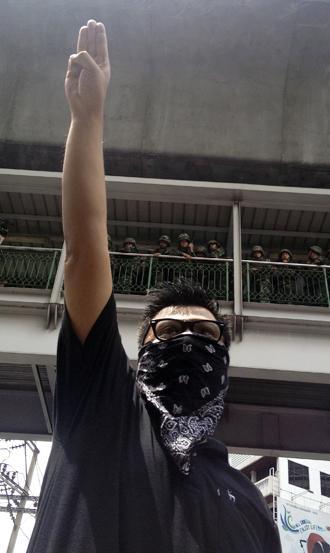 In this Sunday photo, an anti-coup protester gives a three-finger salute as soldiers keep eyes on him from an elevated walkway near a rally site in central Bangkok. [AP/NEWSIS]

BANGKOK - The three-finger salute from the Hollywood movie “The Hunger Games” is being used as a real symbol of resistance in Thailand. Protesters against the military coup are flashing the gesture as a silent act of rebellion, and they’re being threatened with arrest if they ignore warnings to stop.

Thailand’s military rulers say they were monitoring the new form of opposition to the coup. Reporters witnessed the phenomenon and individuals were captured on film making the raised-arm salute.

“Raising three fingers has become a symbol in calling for fundamental political rights,” said anti-coup activist Sombat Boonngam-anong on his Facebook page. He called on people to raise “3 fingers, 3 times a day” - at 9 a.m., 1 p.m. and 5 p.m. - in safe public places where no police or military are present.

The gesture emerged over the weekend as protesters joined small flash mobs, or stood alone, flashing three fingers in the air.

“We know it comes from the movie, and let’s say it represents resistance against the authorities,” Col. Weerachon Sukhondhapatipak, a spokesman for the junta, told The Associated Press.

“If a single individual raises three fingers in the air, we are not going to arrest him or her,” he said. “But if it is a political gathering of five people or more, then we will have to take some action.

“If it persists, then we will have to make an arrest,” he said.

In “The Hunger Games” movie series and book trilogy, the salute symbolizes rebellion against totalitarian rule, signifying thanks, admiration and goodbye to a loved one. But Thai protesters gave varying explanations. Some cited the French Revolution’s trinity of values: liberty, equality, fraternity. Others said it means freedom, election and democracy.

A photo montage circulating online paired a picture from “The Hunger Games” with a graphic of three fingers labeled, 1. No Coup, 2. Liberty, 3. Democracy.

While the strife-imitating-art nature of the phenomenon is extraordinary, it’s not unprecedented. Other examples of pop culture symbols being used to express political sentiments include Occupy protesters wearing the Guy Fawkes mask from the “V for Vendetta” movie. The practice of tying a yellow ribbon as a symbol of support for hostages, missing soldiers or prisoners was popularized in part by the song “Tie a Yellow Ribbon Round the Ole Oak Tree” that topped the charts in 1973.

A spokesman for the film distributor Lionsgate said the company was aware of the Thai protest but had no comment.