Olympics of math are coming to Seoul in August

Olympics of math are coming to Seoul in August 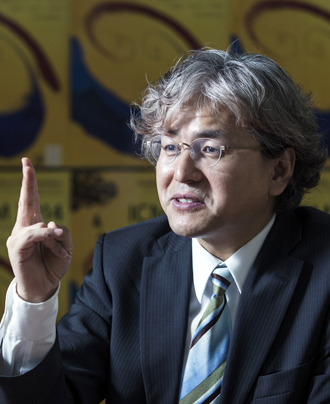 Only two months remain on the calendar before the International Congress of Mathematicians (ICM), the largest conference for mathematics, opens in Seoul. The quadrennial conference, dubbed the Olympics of mathematics, will be held at the COEX Mall in Samseong-dong, southern Seoul, between Aug. 13 and 21.

The JoongAng Ilbo sat down with Park Hyung-ju, chairman of the ICM Organizing Committee and a professor of mathematics at Pohang University of Science and Technology (Postech) in Pohang, North Gyeongsang, to hear more about the conference.

A. It is the oldest international conference in existence. The Olympics were initially held in Athens in 1896 and the first ICM took place just a year after that in Zurich.

Mathematics is commonly thought as a loners’ field in academics, something you study by yourself in a corner of your room, but that’s not true. Math has long been openly discussed among many different people, and through that process, the most difficult problems were solved.

What do members of the ICM actually do?

We get together and verify what we know and don’t know. For instance, German mathematician David Hilbert introduced a list of 23 unsolved problems at the ICM in Paris in 1900. Since then, math scholars have put their heads together to reach solutions to those problems. Still, two remain unsolved.

What difference does solving an “unsolved problem” make? Isn’t it sheer self-indulgence?

An unsolved problem itself is simply a conversation topic. The process of solving that problem is where the universe newly unfolds. Fermat’s last theorem paved the way for discovering elliptic curve cryptography, the theory we use today in coding our transportation cards. The passwords we use in e-commerce are relevant to an unsolved problem called the Riemann hypothesis; if it gets solved, we might have to change our entire password system. As you can therefore see, mathematics is closely linked to our everyday lives.

In what way will hosting the ICM be beneficial for Korea?

Through the Berlin meeting in 1998, Germany was able to promote mathematics among its general public and strengthen ties between the former west and east sides of its country. After the Beijing meeting in 2002, the number of mathematical theses published in China jumped threefold through the following decade. [China’s leap] was credited to governmental support and funneling money to the mathematics field.

Many local students avoid math due in part to the local educational system, which focuses on cramming for the College Scholastic Ability Test.

That’s because [the educational system] is only teaching students how to study math, not why. Nate Silver, the man who precisely forecasted the U.S. presidential election, is a statistician. The Walt Disney Company, an animation business, employs hundreds of mathematicians. [Schools] should inform students about these facts. Math is hard. But it’s crucial to instill hope in [the students] so they can endure [the hardships that are entailed in studying the subject].