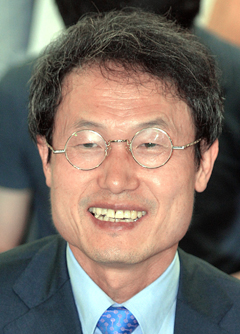 Cho, the only liberal in the Seoul race, had 39.1 percent of the 4,948,614 votes, the National Election Commission confirmed today.

The other three candidates were all from the conservative arena. Moon Yong-lin, the incumbent Seoul superintendent, was second with 30.7 percent, followed by Koh Seung-duk, a lawyer turned politician, with 24.3 percent and Lee Sang-myun, a Harvard-educated law professor, with 6.0 percent.

Cho’s key pledge was to expand ordinary public high schools and new so-called revolutionary schools with curriculums that focus on discussion, essay writing and creativity. He aims to reduce the number of international schools, foreign language high schools and autonomous private schools, all of which are regarded as expensive elite institutions. He described them as one of the causes of social and economic inequality.

Another of Cho’s core pledges was to launch public kindergartens where children of underprivileged families would get preference for admission. Private kindergartens would be under the control of the education office, he said.

In Seoul, Cho, a sociology professor, was the last candidate expected to win, as former liberal Superintendent Kwak No-hyun stepped down in disgrace because of election bribery.

Days before the election, Koh had large leads in several polls.

As one of the few people who passed the nation’s three most difficult exams - the bar exam, test for diplomat and test for high-level government official - Koh promoted himself as someone who became a successful lawyer without expensive private schooling and pledged education reform.

However, four days before the election, Candy Koh, his daughter from his first marriage who lives in the United States, posted a scathing open letter to Seoul residents on her Facebook page. She said her father was not qualified to be education superintendent because he had abandoned her and her brother and never participated in their learning.

After Koh accused his conservative rival Moon of colluding with his father-in-law to urge his daughter to post the message, the negative campaigning between the two conservative rivals quickly degenerated into mudslinging.

In the 2010 races, there were six liberal winners out of the 16 regions: Seoul, Gwangju, Gyeonggi, Gangwon, North Jeolla and South Jeolla.

Superintendents are elected for a four-year term. Known as the “president of education,” the position wields major authority in the South Korean education system. Each superintendent controls an annual budget of millions of dollars and has the authority to establish new schools and kindergartens, as well as hire teachers and officials in his or her office.

The Seoul education chief, for instance, manages an annual budget of about 7 trillion won ($6.8 billion) and controls a total of at least 50,000 employees and faculty.

However, despite the powerful authority of the superintendent, the chief of education elections have not drawn much public attention compared to mayoral or provincial governor elections.

Superintendent candidates are not affiliated with political parties.

This year, there were few differences among candidates’ pledges. Both conservatives and liberals emphasized campus security and safe infrastructure, expanding or continuing free school lunches and enhancing learning. They disagreed over some sensitive issues, such as whether to shut down private elite high schools or newly launched “revolutionary schools.”

This year’s education chief election was the only one in which a candidate without experience in the education sector was able to run.

The National Assembly revised the education law in 2010 to remove a clause requiring at least five years of experience in education to run superintendent elections.

However, in February, the assembly accepted the opinions of both conservative and liberal teachers about inexperienced superintendents and revived the requirement, while reducing the number of years to three starting in 2018.

Among the 72 candidates running in the 17 superintendent elections nationwide, four - including Koh - had no experience in education.