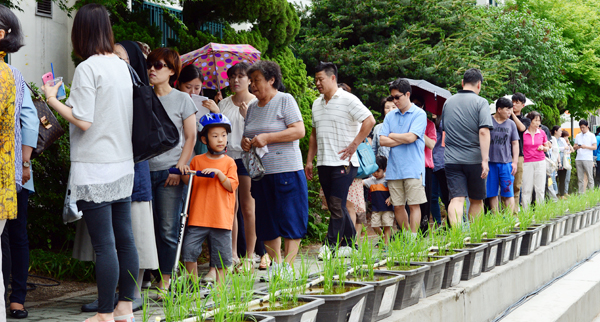 Voters wait in line to cast their ballots for local elections yesterday at a polling station set up in Jaedong Elementary School in Jongno District, central Seoul. [NEWS1]

More than 23.46 million people, or 56.8 percent of eligible voters, cast ballots yesterday in local elections — the highest number in 16 years.

But that still fell short of predictions made by the top election watchdog, which said the total turnout could exceed 60 percent following the highest-ever advance voting turnout and the unpredictable outcome of the elections themselves.

The advance voting turnout on Friday and Saturday yielded a record 11.5 percent, or more than 4.74 million people, with unexpectedly active participation from young voters in their 20s.

The turnout yesterday was 2.3 percent higher than for the last local elections, held in 2010, in which 54.5 percent of eligible voters cast ballots.

There were more than 41.29 million eligible voters — those aged 19 and over — for the elections, or more than 80 percent of the nation’s population of 51.33 million, according to the National Election Commission.

A record 48,400 foreigners were among those eligible to vote.
In 2006, foreigners aged 19 years and older who had permanent residency status and had lived for more than three years in Korea were granted the right to vote in local elections.

Many female immigrants from multi-ethnic families have been actively campaigning to mobilize eligible foreigners to vote ahead of the local elections.

Some 58.6 percent of Seoul’s 8.44 million eligible voters turned up to cast ballots yesterday — higher than the national average, according to the National Election Commission. 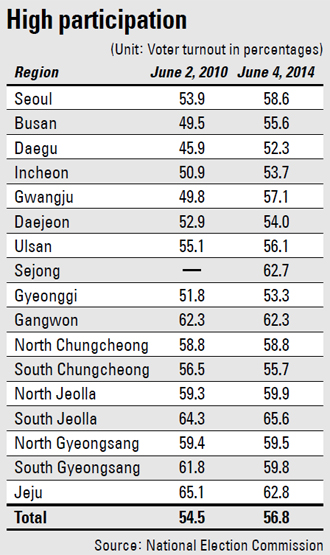 The largest turnout came from liberal stronghold South Jeolla at 65.6 percent, followed by Jeju Special Self- Governing Province at 62.8 percent, newcomer Sejong City at 62.7 percent and Gangwon at 62.3 percent.

In contrast, major cities had less stellar turnout rates. Ruling party stronghold Daegu counted the lowest rate of voting at 52.3 percent, followed by Gyeonggi at 53.3 percent and Incheon at 53.7 percent.

Ansan, the Gyeonggi city under a pall since hundreds of students from its Danwon High School were lost in the Sewol ferry disaster on April 16, counted a voter turnout of 48.1 percent, lower than the provincial average.

Gyeonggi, the most populous province, has 9.68 million eligible voters but traditionally sees a low turnout.

Similarly, cities had a lower percentage of voters that year. Seoul’s turnout was 53.9 percent, Incheon had the lowest rate at 50.9 percent and Gyeonggi was slightly higher at 51.8 percent, according to the National Election Committee.

For the May 31, 2006, local elections, the turnout was even lower at 51.6 percent. The percentage of voters in Seoul was below the national average at 49.8 percent.

Jeju, on the other hand, saw a whopping 67.3 percent turnout, ahead of North Jeolla’s 64.3 percent. Incheon logged the lowest at 44.3 percent.

In contrast, the turnout for the 2012 presidential election in December was 75.8 percent, where votes from the older generations in their 50s and 60s made a decisive difference.

About 1.16 million out of more than 7.3 million eligible voters between the ages of 19 and 29 cast ballots in the two-day early voting held over
the weekend, making up 15.97 percent of the total votes. The main advance voting participants were people serving military duty.

Analysts pointed to various reasons why voting rates were not as high as initially anticipated, including because of the long weekend followed by a national holiday for the elections yesterday and Memorial Day tomorrow.