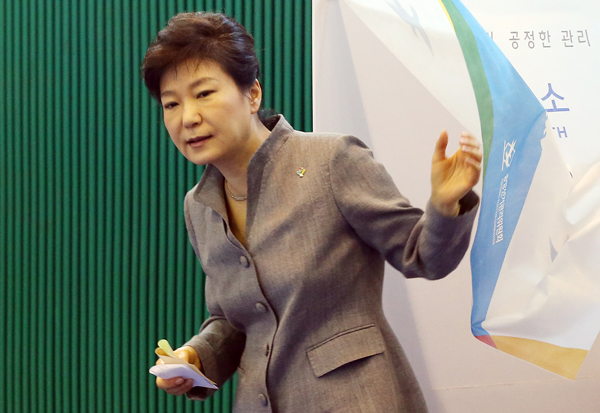 President Park Geun-hye casts her ballot for local elections yesterday at a polling station set up in Seoul National School for the Deaf in Jongno District, central Seoul. By Byun Sun-goo

As the count in yesterday’s nationwide local elections came in last night, the atmosphere at the Blue House took on a roller coaster quality as the results kept changing.

The president’s office had anticipated that the elections would not be favorable to the ruling party after the Park Geun-hye administration lost the public’s trust for its poor handling of the Sewol ferry disaster on April 16.

But it was surprised at how sympathetic voters were to the party’s message that casting a ballot for the Saenuri Party would be synonymous with saving the president and allowing the government to push forward with its changes.

The ruling party was ahead in nine out of 17 main races as of 10 p.m., compared to eight for the opposition New Politics Alliance for Democracy (NPAD), although five of the races were razor thin as of press time last night.

On the eve of the election, Blue House sources said that a win for Saenuri Party candidates in nine or more of the main mayoral and governor races, the party would consider it a victory.

The presidential office said it would interpret a triumph as a sign that the people support President Park in her drive to reform the government and eradicate collusion between bureaucrats and the industries they oversee.

“We are monitoring the ballot tally calmly,” said a Blue House official yesterday. “We are not in a position to offer comments concerning the election results, given they have yet to be confirmed at this moment and the Blue House is not a political party,” the official said, refusing to provide further details.

The repercussions of a defeat would be immense. The opposition NPAD and the Saenuri Party would likely speak out to pressure the president to increase the scale of the planned reshuffle.

But some critics expressed concerns that the Blue House may consider the neck-and-neck race a sign that the public is opposed to a major reshuffle.

Presidential Chief of Staff Kim Ki-choon, a controversial figure widely considered to be the mastermind behind the majority of state affairs and presidential decisions, may stay despite persistent demand from the opposition for him to step down.

After Saenuri Representative Chung Ui-hwa from the non-pro-Park faction was elected as National Assembly speaker on May 23, it would not be far-fetched to see a non-mainstream figure from the party selected as chairman at the party convention on July 14.

Under that scenario, the pressure for President Park to change her widely-criticized governance style, in which she relies on her own judgment without referring to public sentiment or the opposition party’s ideas, is expected to mount.

Regardless of the results, Park must nominate a prime minister and National Intelligence Service chief, and carry out a wide-scale reshuffle.

The verification of candidates for prime minister is in its final stage and the Blue House is likely to unveil its nominee by the end of next week.

The president told her senior secretaries on Monday that the new prime minister will be an individual who will spearhead the national reform that the public is demanding.

Multi-term lawmakers and figures known for their social and ethical responsibility are on the list, according to sources.

The morality of the prime ministerial candidate has become one of the most crucial requirements after Ahn Dae-hee, called “Mr. Clean,” whom the Blue House confidently nominated, withdrew his nomination on May 28 after it was revealed that he earned more than 1.6 billion won ($1.56 million) in five months after retiring from the Supreme Court and going into private law practice.

A cabinet reshuffle can come only after the prime minister is appointed because President Park promised she would endow the new prime minister with more power and responsibility in the cabinet nominations.

The president cast her ballot at the No. 1 polling station in Cheongun Hyoja-dong near the Blue House at 9 a.m. yesterday.

As she left the venue she shook hands with several election observers and one of them refused to respond to her handshake offer. He turned out to be a member of the liberal Labor Party.

The incident stirred opposing reactions in cyberspace. Some described the man, surnamed Kim, as an impolite and impudent figure while others cheered his resistance.