The ruling Saenuri and the opposition New Politics Alliance for Democracy emerged split in winning 17 key races from yesterday’s elections. The Saenuri won in eight metropolitan and provincial elections, avoiding a worst-case scenario that it might loss its traditional strongholds, namely Busan mayoral election, to the NPAD, in the face of the Sewol sinking disaster.

Seoul Mayor Park Won-soon beat off a re-election challenge by the Saenuri’s Chung Mong-joon by one of the widest margins in the main races yesterday, 56.01 percent to 43.1 percent.

With Park’s victory, he emerges as a front-runner in the 2017 presidential election. Serving as Seoul mayor can be a stepping stone to the presidency, as in the case of former President Lee Myung-bak. 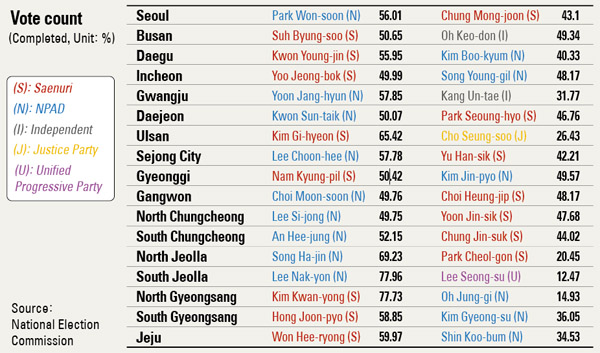 Park was elected after former Mayor Oh Se-hoon resigned from his post in August 2011. Oh staked his mayoral post on a referendum vote on free lunch programs, which he opposed but Seoul citizens favored.

The Incheon mayoral and Gyeonggi provincial elections were seen as important races to win for the two parties because of their proximity to Seoul and it role as a barometer of public sentiment in the governance of the Park Geun-hye government.

Voter turnout yesterday was relatively high at 56.8 percent, a figure that combined 11.5 percent turnout in early voting held on Friday and Saturday. Though yesterday’s turnout was 2.3 percentage points higher than local elections in 2010, it fell short of an earlier forecast by the National Election Commission that it would reach 60 percent.

The opposition had urged voters to vote to punish the administration of President Park Geun-hye for its bad handling of the April 16 sinking of the Sewol ferry, which killed more than 300 people, most of them high school students.

Park’s party, which expected an easy victory before the tragic accident when Park’s approval ratings were above 60 percent, ran a highly defensive campaign urging voters to give its candidates a chance to help a struggling president make reforms that would avoid another such tragedy.

Voters seemed to have been split in the middle by the two arguments. 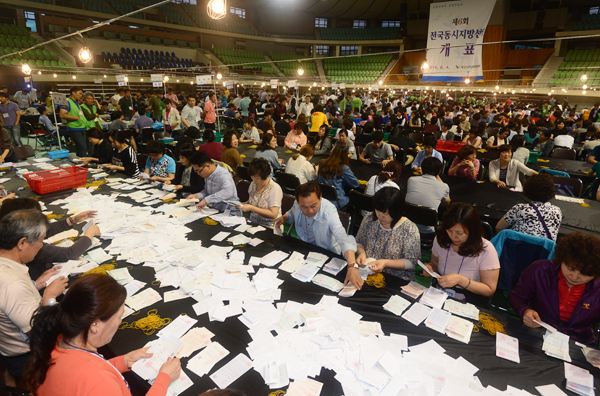 More than 3,900 positions were voted on yesterday in four tiers of local government: the mayors of the eight major metropolitan areas - Seoul, Busan, Daegu, Incheon, Gwangju, Daejeon, Ulsan and Sejong City - and members of their city councils and education superintendents; governors of the country’s nine provinces, members of their provincial councils or legislatures and education superintendents; mayors of 74 smaller cities and their city council members; and heads of the country’s 69 district offices and members of their district councils.