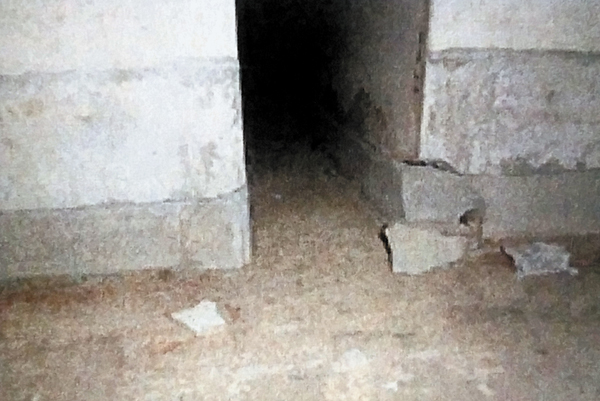 Taken during an inspection by the Korea Railroad Corporation, this photo shows damaged parts of a precast slab track manufactured and installed by Sampyo E&C. The company is suspected of bribing officials of Korea Rail Network Authority to win contracts. Provided by Representative Shim Jae-chul

The state-run railway construction company is accused of unfairly awarding a private company a contract of 40 billion won ($38 million) to supply parts - and the parts provided by the company had many defects.

The revelation is fueling suspicions that the public company awarded contracts in exchange for bribes from Sampyo E&C, the parts supplier.

Prosecutors imposed a travel ban on the chairman of Sampyo on suspicions of bribing high-ranking officials of the Korea Rail Network Authority (KRNA), the state-run railroad construction corporation in charge of awarding contracts. Under the contract signed in 2011, Sampyo E&C was to supply precast slab track, concrete panels that are placed beneath rails to provide track stability.

Korail also suggested that the KRNA reconsider the design of the track system and come up with ways to prevent further defects. Railroad experts warned that cracks in the concrete panels could actually cause trains to derail.

Despite the warnings, the KRNA signed further deals with Sampyo to provide the same panels on the Honam High Speed Railway and a line that connects Banseong Station and Jinju Station in South Gyeongsang. Sampyo has contracts to provide the panels for an additional 10 sections of railway lines.

Following the warnings, the KRNA held an evaluation of the safety of the parts supplies by Sampyo, and several outside experts said Sampyo’s parts were not safe enough. The railway authority held four more evaluations and managed to receive conditional approval from the commission members.

“We understood to some degree why the state-run company favored Sampyo,” said one of the experts who participated in the evaluations. “That’s because they used indigenous technology rather than that of foreign companies.

“But I think the KRNA went to extreme lengths to favor Sampyo despite the fact that Sampyo was not able to provide reliable parts and service,” said the expert.

Investigators are looking into connections between the state company and Sampyo’s management, as well as alleged underhand dealings and bribes. Shin Kwang-soon, current vice chairman of Sampyo E&C, once served as president of Korail.