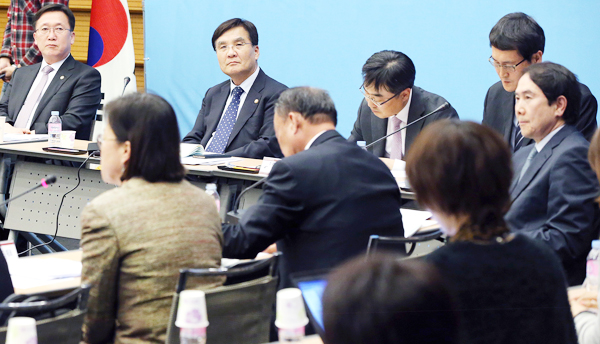 Senior officials from the central and provincial governments discussed how to reform the current local autonomy system in April. [JoongAng Ilbo]

The phrase “era of regions” was on everyone’s lips in 1977, three decades after local self-government began. Kanazawa Prefecture Governor Kasuji Nagasu proclaimed, “The era of welfare and humanity is the era of regions.” He advocated that politics, the administration and finance system should be changed from authority delegated by the central government to authority through participation. The goal was “small central government and extensive regional governments.”

“The era of the regions” became the objective of local government in Japan in the 1980s. Nagasu was a reform-minded governor who was nominated by the coalition of Socialist and Communist parties and elected in 1975. Serving 20 years over five terms, he left a great legacy in local administration. He enacted the ordinance of public information and introduced environment impact evaluations. Also, he appointed civilians as his aides, which was a drastic decision at the time.

In his inaugural speech, he described the regional administration of the 1970s as “the state as the headquarters and the 47 metropolitan and prefectural governments as branches.” The system was referred to as 30 percent autonomous. The regional tax revenue was shared in a seven-to-three ratio between the central and local governments, and the division of operations was similar. The iron triangle of the Liberal Democratic Party, bureaucrats and industry dominated the central administration.

But the innovative governors challenged the central power and advocated regional autonomy. Tokyo Governor Ryokichi Minobe was a notable champion of local autonomy. Beginning in 1967, he served three four-year terms, confronting the central government. In the 1971 reelection campaign, he defeated former Prime Minister Eisaku Sato, who had supported the United States and its war in Vietnam. His campaign slogan was “Stop the Sato.”

As the sixth local administration heads are elected in Korea, reviewing the progress of regional administration in Japan helps when it comes to understanding the process in Korea so far. While the history and environment of regional autonomy in Korea and Japan differs, the relationship between central and regional governments, and the general system is similar. Decentralization theories advocated by regional governments and scholars are similar to what Japan experienced in the past.

However, we haven’t had the pivotal moment to push for regional autonomy. Korea hasn’t drawn the big picture of decentralization yet. Decentralization itself cannot be the objective. When authority, funding and accountability go to the local governments, citizens will be able to receive more efficient public service. This was the original idea. Also, decentralization will ultimately make cities and provinces more diverse, competitive and energetic. However, Korea’s regional administrations are still only 20 percent autonomous. The operation of the central and regional governments and the revenue of the national and regional taxes are 8o percent to 20 percent in Seoul’s favor.

In the June 4 regional elections, candidates failed to address this structural issue. Not many candidates running for metropolitan and local government leadership proposed ideas to make the pie bigger and change the region. Their policies were concentrated on certain issues. The regional election became a contest of political parties. The party nominations for the local election virtually fixed the election into a political rivalry. Some lament that it was all about getting elected, not autonomy. Public service in the field should be free from central politics.

The National Assembly is largely responsible, as it solidly supports centralized power. The National Assembly turned down the bill for comprehensive transfer of state affairs to local governments and the installation of a decentralization special committee proposed by the Decentralization Promotion Committee during the Lee Myung-bak administration. The organizational reshuffle of the Ministry of Security and Public Administration, which mainly deals with regional autonomy, is a great opportunity to discuss transfer of duties to local governments and division of authority. National renovation cannot be complete without a new governance of central and regional administrations. A small central government and big local government cannot be attained without the rise of the regions. The challenge to the established ideas will change the world.