What is China’s biggest weakness?

What is China’s biggest weakness? 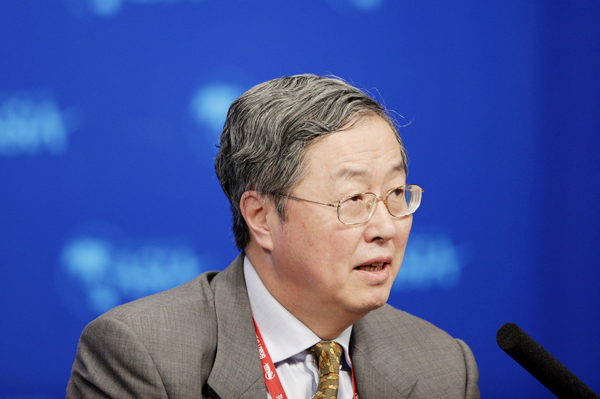 Zhou Xiaochuan, governor of the People’s Bank of China, speaks at the Boao Forum for Asia in Boao, Hainan province, China, in 2010. [AP/NEWSIS]

It took China to prove Friedrich Nietzsche wrong. What didn’t kill the Communist Party hasn’t made it stronger. It’s only making the inevitable crash bigger, more spectacular and needlessly dangerous.

China’s debt reckoning is coming. Maybe not this quarter or this year, but Chinese President Xi Jinping’s unbridled effort to keep growth from falling below the official 7.5 percent target is cementing China’s fate. China is investing just as much as it did in 2008 and 2009, when authorities were desperately trying to avert a slowdown. Just as debt troubles in Japan, Europe and the United States ended badly, so will China’s.

Why, then, with so many clear examples of financial excess leading to ruin, is Xi continuing down this road? Blame it on the ghosts of Tiananmen Square.

In the aftermath of the crackdown on student protesters on June 4, 1989, China’s leaders made a bargain with their people: We will make you richer, as long as you no longer dissent. After the crash of Lehman Brothers, the regime had to go to extraordinary lengths to keep up its end of the bargain, pumping up what was already the world’s highest investment rate. In doing so, China itself became a Lehman economy - powered by shadowy funding sources, off-balance-sheet investing and unconvincing claims that all remained well.

For a while this rampant investment growth seemed to make China stronger; now that strategy is its main vulnerability. Yet Xi and Premier Li Keqiang apparently can’t bring themselves to roll back those policies and rebalance the economy away from exports and toward more consumption. They know that if they do so, growth will slow a lot, challenging the post-Tiananmen compact - and in the Internet age, no less. As anger grows over any slowdown, Chinese censors won’t be able to delete text messages and microblog entries fast enough.

It’s often said that when the United States sneezes, the entire world catches a cold. But the eventual popping of China’s $23 trillion credit bubble could send many nations to the emergency room. Any crash would make deflation China’s biggest export.

China’s brawn is widely misunderstood. Take Donald Trump’s recent musings to Fox News about China’s rising economic dominance and the tragedy of the U.S. borrowing from Beijing to service a debt “no one ever dreamt possible.” You would think a man with Trump’s track record of bankruptcies would understand that losses from debt don’t disappear. When a company, or nation, rolls over unpaid debts without resolving them, profits - or gross domestic product - are overstated, as China’s is today.

Where are the big defaults? Clearly they’re being papered over, which only encourages more risky lending. Bad debts are at a five-year high. At the end of 2013, China’s 10 largest lenders reported that overdue loans had increased 21 percent from a year earlier. That’s hardly catastrophic for a nation with about $4 trillion of foreign currency reserves. But the real problem is this: Most of the real debt accumulation is in areas the outside world can’t track. In many cases, that goes for authorities in Beijing, too.

The last four years, says Michael Pettis, a finance professor at Peking University, saw epic increases in borrowing outside the regulatory framework. When the People’s Bank of China manages the economy, it’s mostly concerned with yuan-based loans. But the vast majority of debt has been built up using letters of credit, bankers’ acceptances and, most importantly, off-balance-sheet tools like so-called wealth-management products in the informal banking arena.

This latter feature of China’s colossal shadow-banking system is comparable to the special-investment vehicles that undid Lehman and other Wall Street titans. It’s also true that loans made at the top of a business or lending cycle are the ones you most regret. Early on, you build airports, bridges, roads and giant sports arenas. After that, misallocated investment becomes a bubble all its own that exacerbates national debt.

Local-government debt risks are bad enough. Investors such as Patrick Chovanec of Silvercrest Asset Management are right when they warn that China’s property bust is the real time bomb. If the main asset underpinning everything from local-government finances to state-owned-enterprises goes bad, watch out. Just ask students of Japan’s crash in 1990, Wall Street’s in 2008 and Europe’s thereafter.

Credit expansion can’t outpace GDP growth forever, not even in China. As Xi flexes his muscles around the world and ramps up military spending, he would do well to reflect on this irony: The very thing from which his party has derived its strength and legitimacy in the 25 years since Tiananmen - a booming economy - is fast becoming its biggest weakness.